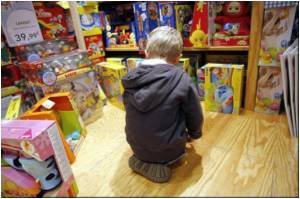 Hazardous playthings such as toxic toys still on sale in US stores as Americans gird for the approaching Christmas and scuttle to store presents for keen children, a US consumer group shared on Tuesday.

In a report dubbed "Trouble in Toyland," commissioners told how they had found unacceptable levels of lead and phthalates, or chemicals, in 25 kinds of toys, as well as products which presented a significant choking hazard.

"While most toys are safe, our researchers still found toys on the shelves that pose choking hazards and other toys that contain hazardous levels of toxic chemicals including lead," Nasima Hossain, a spokeswoman from the US Public Interest Research Group, said in the report.

The issue was brought before US lawmakers with some people maintaining that powerful lobby groups are stopping Congress from going further and adopting even tougher laws to improve toy safety.

"It's sort of unconscionable and outrageous that the Congress is trying to attack some of the authority and the funding for the Consumer Product Safety Commission," said Ivan Frischberg, the father of a two-year-old girl.

"I believe that everyone -- consumers, industry and government -- is making progress on safety," said CPSC Commissioner Robert Adler. "But, we need to continue to have all hands on deck when it comes to promoting product safety, including consumers and industry, in addition to the CPSC."

Some 80 percent of the toys sold in the United States are imported, with most coming from China.

Toxic Toys For Toddlers
Toys in Indian stores were found to contain an alarmingly high ratio of lead, which made them unsafe for children
READ MORE

Toxic Toys, Possibly of Chinese Origin, Seized in Australian State
Thousands of toxic toys have been seized from a Melbourne warehouse by the Victorian government in Australia. They could be of Chinese origin, it is suspected.
READ MORE