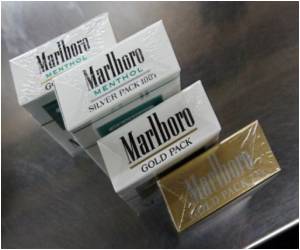 A US law banning the selling of so-called "light" or "mild" cigarettes took effect Tuesday, but some anti-tobacco groups say the makers are sidestepping the rules by using color-coding packaging.

The measure signed into law a year ago by President Barack Obama regulates tobacco for the first time and prohibits, starting Tuesday, packaging using the terms "light," "mild," or "low" -- which could lead smokers into believing they are not as harmful.

But regulators and tobacco firms are still battling over how the new measure will be implemented.


Some say that color-coding packs and switching to terms such as "gold" and "silver" instead of "light" and "ultra-light" are efforts to continue misleading consumers.

Smoking causes many diseases and affects the overall health of smokers.
Advertisement
"With a wink and a nod, the tobacco industry has found new ways to continue their deceptive marketing practices to circumvent the new regulations," said Charles Connor, president of the American Lung Association.

"For example, they must drop the word 'light' in their packaging, but have already made it clear to their customers that if they want lights, they just need to look for a package in a specific color, such as gold.

The FDA sent a letter last week to Philip Morris USA questioning the terms included in Marlboro Lights packs before the ban.

The packaging says, "Your Marlboro Lights pack is changing. But your cigarette stays the same. In the future, ask for 'Marlboro in the gold pack.'"

The FDA asked for documentation from the cigarette maker to determine if it was deliberately circumventing the law.

"We applaud the FDA's action," said Matthew Myers of the Campaign for Tobacco-Free Kids.

"We call on Philip Morris to go beyond the actions called for by the FDA and immediately stop" using these materials, Myers said.

"Any activity that misleads consumers into believing that certain cigarettes are safer and discourages smokers from quitting is harmful to public health."

Other new anti-smoking restrictions also came into effect Tuesday. The new rules will bar tobacco company sponsorship of athletic, musical or cultural events, restrict distribution of free samples and prohibit sales of cigarettes or smokeless tobacco to people younger than 18.

"As we complete our first year executing this important new responsibility, FDA has much to be proud of and much yet to do to improve public health through effective tobacco regulation," said FDA Commissioner Margaret Hamburg.

Test Your Knowledge About Chromosomes?
View all
News Archive
News Resource
Advertisement
News Category
Milestone In Voluntary Blood Donation Achieved Samsung Reinvents Toilet for the Poor Which is a Better Form of Exercise: Daily or Weekly? First Phase of Foot-and-Mouth Disease Vaccination Shocking News: Polio Cases Return After a Decade in the US
More News
Sign up for Wellness Consult a Doctor Sign up for Selfcare