US Baby Dies of Salmonella from Pet Turtle

A three-week-old girl died of salmonella transmitted by a pet turtle, while 22 other people were infected by the small reptiles across the United States since September, health authorities said. 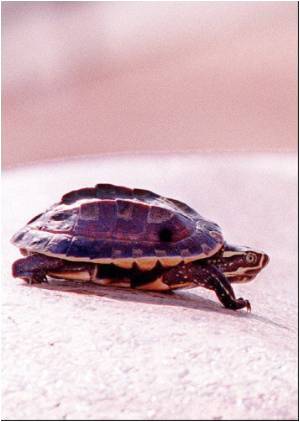 US Baby Dies of Salmonella from Pet Turtle

The Centers for Disease Control and Prevention (CDC) revealed the incidents in a weekly report dated Friday reminding Americans of the health risks associated with small turtles, whose sale was banned in 1975 because they can infect children.

The infant girl was taken to a Florida hospital, where she was in febrile and in septic shock, on February 20. She was given antibiotics but died on March 1, the CDC said in its "Morbidity and Mortality Weekly Report."

Cultures of cerebrospinal fluid and blood samples taken from the infant found a type of salmonella identitical to the one carried by the turtle, it said.

The turtle, which had a 3.2-centimeter (1.25-inch) shell, had been given to the family in January by a friend who bought it at a flea market.

The 1975 law bans the sale of turtles with a carapace fewer than 10 centimeters (four inches) long.

"Small turtles have posed a particular danger to young children because these turtles might not be perceived as health hazards and can be handled like toys," the CDC said.

"Salmonella infections in children can be severe and can result in hospitalization and occasionally in death," it said.

Salmonella can be transmitted to humans by direct or indirect contact with a turtle or its feces, the CDC said.

The CDC said that turtle-linked infections continue to occur because the sales ban is not "fully enforced" and contains exceptions for educational purposes.

Salmonella illness remains a "major public health problem in the United States," the CDC said in the report

Poor hygienic practices during cooking or handling of food products can cause this distressing infection of the intestines leading to diarrhea, cramps and fever.

Diet during typhoid should be given close attention, as its an important part of the treatment. Proper care should be taken while cooking and choosing foods.

Consuming foods that have been contaminated with pathogens such as E.coli, Salmonella or Campylobacter, can cause food poisoning.

Neonatal abstinence syndrome is a condition where newborn babies experience withdrawal symptoms due to use of addictive illicit or prescription drugs such as narcotics.

What is Antenatal care and its importance during pregnancy for mother and baby, with details on the medical test preformed during the first visit to the doctor.