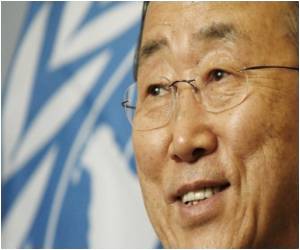 UN Secretary General Ban Ki-moon on Wednesday announced a 40-billion-dollar drive to improve the health of women and children, which he said would save millions of lives around the world.

Governments, philanthropists and private groups pledged the cash, giving a spectacular end to the UN summit on eliminating poverty, a campaign that has been badly battered by the international financial crisis.

Ban Ki-moon Shocked by State of the Aral Sea; Calls It Environmental Disaster

United Nations Secretary General Ban Ki-moon has termed the 'Aral Sea' as one of the planet's most shocking environmental disasters.
Advertisement

"We know what works to save women?s and children?s lives, and we know that women and children are critical to all of the Millennium Development Goals," said the UN chief in a statement. "Today we are witnessing the kind of leadership we have long needed."


He estimated that his Global Strategy for Women's and Children's Health could save 16 million lives by 2015.

Ban Ki-moon complimented the Health Minister Dr. Anbumani Ramadoss for his leadership in the health sector and described him as a public health champion,
Advertisement

Cancer is a Global Health Priority, Not a "Rich Man's Disease" : Experts

Medical experts are calling for action on cancer, saying that it is not a 'disease of the rich' but a global health priority.

Does foreign policy make a difference to global health ?
Advertisement