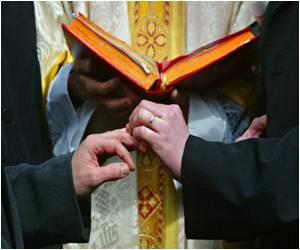 Gay sex has been fueling HIV infections at an alarming rate in Philippines where the influential Catholic church discourages the use of condoms.

The Southeast Asian country is facing a HIV epidemic, with sex between men making up nearly 90 percent of all new cases, according to the health department and the United Nations' Development Programme (UNDP).

Ten new infections are being detected every day, three times the rate of just a few years ago, the UNDP said.


Although the total of 9,669 confirmed cases is relatively small in a population of nearly 100 million people, authorities acknowledge many more cases likely remain undetected and point to the concerning upward trend.

The Philippines is one of only seven countries globally where HIV cases have risen by 25 percent or more since 2001, according to the UNDP.

"This is a worrying explosion of HIV cases marked by a shift in the way the virus is transmitted," Philip Castro, the UNDP's HIV/AIDS programme officer in the Philippines, told AFP.

He said 87 percent of new infections were attributed to unprotected men-to-men sex (MSM), in a country where condom use overall is one of the lowest in Asia.

"What's more alarming is that more than 60 percent of (those engaging in) MSM had reported having unsafe sex in their last contact," Castro said.

Lack of public education about HIV, the virus that causes AIDS, as well as the shame of living with the disease, also prevent many from acknowledging infections and seeking help, health experts said.

They lay a lot of the blame on the powerful Catholic Church, of which 80 percent of the population are followers, for spreading a conservative message they say has led to a lack of understanding and tolerance about condoms.

Unprotected sex remains extremely common in the gay community, according to Humphrey Gorriceta, who contracted HIV after having unprotected sex with multiple male partners.

The 37-year-old former art gallery manager is now campaigning to raise public awareness about the dangers of unsafe sex and help other people infected with HIV.

"I know a lot of people living with HIV that are not allowed to go to school, to attend church services and gain access to certain health services," he told AFP.

"HIV is like the modern leprosy, except it is hidden."

Gorriceta said two friends who were diagnosed with HIV committed suicide recently due to depression.

"I helped the police take down one of them from hanging on the ceiling," he said.

Gorriceta, one of only three men who have publicly come out about their disease, said he believed the number of people with HIV was higher than the official tally.

"Not all the people who are supposed to be tested get tested, and many of them are not properly aware of condom use," said Gorriceta, who is studying for a masters degree in public health.

And while nearly all the new HIV cases in the Philippines are being detected among the gay community, prominent safe sex campaigner and columnist Ana Santos warned other sectors of the community were also in danger.

She said there were cases of bisexual men who contracted HIV after having gay sex, then unknowingly transmitted the disease to their girlfriends or wives.

"They were having sex with other men or transgenders and were also having sex with their partners," she said. "These are things that are not openly talked about so we do not have a complete understanding of this phenomenon."

"Our society is very conservative, people are not open to talking about sex much less about men having sex with men."

Santos also said religious edicts had influenced society so that sexually active people often did not buy condoms or contraceptives because of shame.

Condoms are sold in drug stores at about a dollar a piece, but this is beyond the reach of the masses in a country where a third of the population live on less than that amount each day.

And with the church pressuring politicians, a 15-year campaign for parliament to pass a reproductive health bill that would require government to give free condoms to the poor has failed.

The bill would also require that sex education be taught in schools.

Experts point to a long-running education, medical check-up and condom give-away programme that has curbed the spread of HIV among the sex worker community as proof that such methods work.

"Based on our assessment, limiting HIV/AIDS among female sex workers has been a relative success," UNDP's Castro said.

The church insists, though, that monogamous partners in responsible relationships is the key to stopping the spread of HIV.

"The reproductive health bill or any law for that matter, would not address rising HIV prevalence," said Melvin Castro, head of the church's episcopal commission on family and life.

"Change of attitude and lifestyle will."