University of Iowa Expert to Testify Before Obama's Task Force 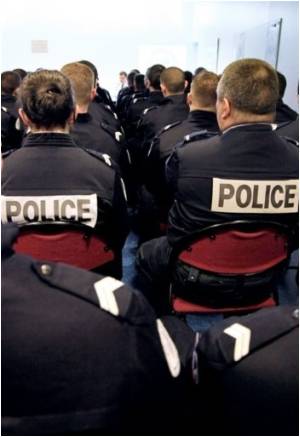 Ramey has studied health and wellness in the police force in the U.S. for two decades. Her studies have found police are subject to critical incident and organizational stress and that this, among other factors, may contribute to higher rates of hypertension, heart disease and physical inactivity in police than the general public.

Her most recent study, published in February 2014 in the Journal of Occupational and Environmental Medicine, measured physical activity of police officers in six departments in the Midwest and Hawaii. The team found the physical demands of police officers are mostly sedentary, generally equivalent to sitting or standing.


To address the lack of activity in much of police work today, Ramey will describe a pilot intervention program, tested in the Milwaukee police department, which improved key health signals, such as blood pressure and heart rate.
Advertisement
She will recommend to the panel it consider expanding the initiative nationwide - similar to a program currently used in the military - and potentially using mobile devices as the platform through which officers can participate.

"Interventions like this one have the potential to save taxpayers millions of health care dollars and money currently spent on stress related disability," Ramey says. "With proper support, the department can expect reduction in health-care utilization and costs, increased officer retention and job satisfaction, and improvements in the quality of police encounters with citizens."

President Obama established the task force in an executive order last December. The panel seeks to identify best practices and make recommendations to the President on how policing practices can promote effective crime reduction while building public trust and examine, among other issues, how to foster strong, collaborative relationships between local law enforcement and the communities they protect.

Traffic Police Create Green Corridor for 77-Year-Old Organ Donor
The Delhi Traffic Police helped a 77-year-old man fulfil his wish of being a social activist in ......