As the United States began a massive campaign to administer 250 million vaccinations by year's end, health care workers lined up to be inoculated against swine flu.

"Vaccine efforts are starting. All states in the US have ordered vaccine. It is being delivered," said Thomas Frieden, head of the Centers for Disease Control and Prevention (CDC), the agency leading the charge against H1N1 influenza. 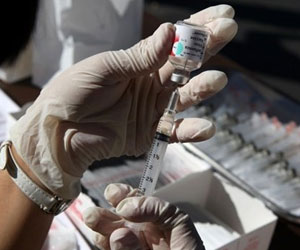 A nurse fills syringes with influenza vaccine at a drive-thru flu shot clinic in Napa, California 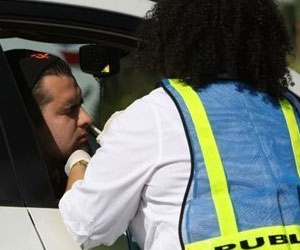 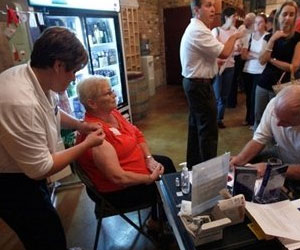 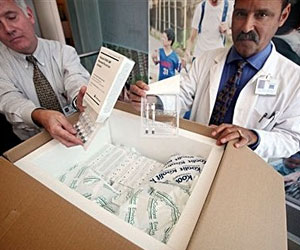 Health care workers, who are among the most at-risk groups according to the CDC, are at the head of the line for the vaccine.


The first H1N1 vaccinations were administered to doctors, nurses, first responders and other health personnel in the states of Illinois, Indiana and Tennessee.
Advertisement
But they got a squirt up the nose, not a shot in the arm, as the nasal spray vaccine has rolled off production lines ahead of the injectable variety.

Just one dose of the nasal spray vaccine provides a robust immune response against H1N1 in adults within eight days, but children under the age of nine, another at-risk group, will likely need two doses.

Some 2.4 million doses of vaccine were available and nearly all have been ordered by public health authorities across the United States, although not all the doses have been delivered, said Frieden.

As health authorities in most states waited for the vaccine to arrive, MedImmune, which has already delivered 5.5 million doses of the nasal spray, was running production at its Pennsylvania facility round the clock to meet demand, spokeswoman Karen Lancaster said.

The vaccine will be made available to states as soon as it rolls off the production line and Frieden was confident that "we'll have substantial amounts available" by the middle of the month.

In New York City, which was hit hard by the H1N1 virus when it first appeared earlier this year, officials plan voluntary vaccinations of children in their schools, rather than asking their parents to take them to the doctor.

In Maryland, pediatricians, family doctors, hospitals and local health authorities will decide whether to vaccinate medical personnel and patients simultaneously.

The move could take care of two at-risk groups at once David Paulson of the Maryland Department of Health and Mental Hygiene told AFP.

In addition to children and health care workers, the CDC has recommended that young adults up to the age of 24, pregnant women, people in contact with infants, and adults under the age of 65 with underlying medical conditions be given priority.

An official at a large hospital in Maryland said none of its staff would be given the nasal spray vaccine because it is made with live virus, which, although greatly weakened, was feared could pose a risk to patients.

"We're going to wait for the injection," she said.

Many groups, including pregnant women and people with chronic medical conditions, are advised against using the nasal spray vaccine.

"The reason it's recommended for healthy people only is because that's where the clinical studies have been done... It's not been studied in other groups, including pregnant women," said MedImmune's Lancaster.

With at least two strains of flu circulating in the United States and warnings from Frieden that "we have not had a flu season like this in more than 50 years," some companies are taking novel steps to tackle the threat.

One Baltimore firm was offering employees incentives for rolling up their sleeves or offering a nostril for a flu inoculation, including time off work.

"For the seasonal flu shot, we pay for an hour with a personal trainer. If they also get the H1N1 flu shot, they get a day off," Tracy Haldeman, president of Pinnacle Communications, told AFP.

"Health is a big focus for us and we're a small, boutique-size agency. So when staff have to take time off, it's more impactful," she said.

Days off in reward for having the flu shot will have to be staggered, Haldeman added.

Inhaled Measles Vaccine To Be More Advantageous Than Liquid Form
Scientists from University of Colorado have revealed that inhaling measles vaccine can be more ......