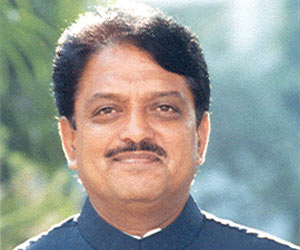 Vilasrao Deshmukh - Union Minister and former Maharashtra Chief Minister passes away at the Global Hospital, Chennai. He was 67.

Deshmukh, who was put on life-support systems, was undergoing treatment for serious liver ailment.

How many of us know that the liver is a vital organ the size of an American Football? To understand more about the liver and its functions spend a few minutes taking part in this quiz.
Advertisement

Vilasrao Deshmukh, who previously held the posts of Minister of Rural Development and Minister of Panchayati Raj and Minister of Heavy Industries and Public Enterprises, was a Maratha leader from Latur, Maharashtra.

He was earlier undergoing treatment at Breach Candy hospital in Mumbai for about a week and had to be shifted to Global hospital, a super-speciality hospital in Chennai due to deterioration in his condition.

Liver Cancer is the uncontrolled growth of cells in the liver. The present section provides a graphic description of the various forms of liver cancer treatment in addition to the latest techniques such as Chemoembolisation and Radio frequency Ablation.
Advertisement
<< Cosmopolitan's Editor-in-chief Helen Gurley Brown Passes Aw...
NHS Trusts Get Very Strict With Authorization for Cataract ... >>

The Essence of Yoga Drug Side Effects Calculator A-Z Drug Brands in India Accident and Trauma Care Noscaphene (Noscapine) Indian Medical Journals Blood - Sugar Chart Drug - Food Interactions Blood Donation - Recipients Blood Pressure Calculator
This site uses cookies to deliver our services. By using our site, you acknowledge that you have read and understand our Cookie Policy, Privacy Policy, and our Terms of Use