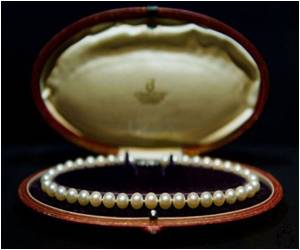 Cherished by kings, queens and movie stars, pearls have long been one of nature's riches, but a new exhibition in London opening on Saturday suggests their origins are far less glamorous.

The show at London's Victoria and Albert (V&A) museum debunks the myths that pearls develop from sand inside a shelled mollusc, revealing instead that they are formed around the larvae of a tapeworm excreted by another animal.

James had consumed too much beer the previous night and was having a nagging headache the next day.
Advertisement

"If you cut a pearl in two you will never find a grain of sand," co-curator Hubert Bari told AFP.


We will never know if this knowledge would have dimmed Marilyn Monroe's love for the necklace of cultured pearls given to her by Joe DiMaggio in 1954, which she continued to wear during their divorce proceedings.

The legend has it that in a bid to win a bet, Cleopatra quaffed a vinegar martini made with a dissolved pearl, the largest in the whole of history.
Advertisement
But her necklace and more than 200 other pieces of jewellery and works of art on show at the V&A do reveal the ancient and near universal love of the beads, which continues today.

Other gems on display are the the pearl-drop earring worn by England's king Charles I at his execution in 1649, and some of the royal jewels sold after the French Revolution.

"We are telling the history of pearls through history," Beatriz Chadour-Sampson, a jewellery historian and co-curator of the show, told AFP.

"In Roman times, pearls were mainly a sign of luxury and power, authority and rank.

"Then we move on to the medieval period, where the birth of the pearl is compared with the Immaculate conception of Mary."

Pearls have long been surrounded in mythology, representing sadness, sorrow but also happiness, she explained.

"It has been said that they were the tears of God falling on the water," Chadour-Sampson said.

One thing that is missing from the exhibition is La Pelegrina, perhaps one of the most famous of all pearls which actor Richard Burton gave to Elizabeth Taylor.

The necklace holding the 16th-century pear-shaped pearl sold at auction in New York in 2011 for more than $11 million.

Jewellery the Real Culprit for the Red, Itchy Marks

According to experts, jewelry allergies are not only extremely common, but very simple to prevent.
Advertisement
<< Study Finds That Birds Lack Important Anti-inflammatory Pro...
Cognitive Enhancers Associated With Increased Harm In Peopl... >>

The Latest Fashion Accessory: Jewellery Made from Mother's Milk!

Forget gold, silver or diamonds, the newest jewellery set to dazzle you will be made from mother's milk! Under techniques to be demonstrated by a group of artists
Advertisement
News A-Z
A B C D E F G H I J K L M N O P Q R S T U V W X Y Z
What's New on Medindia