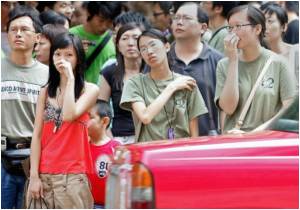 The sudden death of a loved one can trigger a variety of psychiatric disorders in people with no history of mental illness.

This is according to researchers at Columbia University's Mailman School of Public Health and colleagues at Columbia's School of Social Work and Harvard Medical School. While previous studies have suggested there is a link between sudden bereavement and an onset of common psychiatric disorders, this is the first study to show the association of acute bereavement and mania in a large population sample.

Newborns, whose mothers were exposed prenatally to any one of the environmental stressors such as trauma, illness and alcohol or drug abuse, could be mentally susceptible.
Advertisement

Findings are published online in the American Journal of Psychiatry. In people aged 30 years or older, the unexpected death of a loved one roughly doubled the risk for new-onset mania after controlling for prior psychiatric diagnoses, other traumatic experiences, and certain demographic variables like sex, race, income, education, and marital status. For those <50 years of age or ≥70 years, the risk increase was more than fivefold. There was no significant effect in people younger than 30 years.


The researchers analyzed data from 27,534 participants in the National Epidemiologic Survey on Alcohol and Related Conditions. Between about 20% and 30% of these participants identified the unexpected death of a loved one as the most traumatic event in their lives. This was still the case among those reporting 11 or more lifetime traumatic events, where losing a loved one unexpectedly was most traumatic for 22%."Our findings should alert clinicians to the possible onset of a wide range of psychiatric disorders, including disorders such as mania, after an unexpected death in otherwise healthy individuals," says Katherine Keyes, PhD, assistant professor of Epidemiology at the Mailman School of Public Health, and principal investigator.

New leads in the search for novel therapies generated by improved understanding of the roles of inflammation and oxidative stress in psychiatric disorders.
Advertisement
"However, it is also notable that the majority of individuals in the present study did not develop mental health issues in the wake of an unexpected death of a loved one."Losing a loved one suddenly also raised the risk of major depression, excessive use of alcohol, and anxiety disorders, including panic disorder, post-traumatic stress disorder, and phobias. The largest risk increases were for post-traumatic stress disorder, which was seen across age groups with an increased risk as high as 30-fold. Most other disorders were concentrated in the older age groups.

Oxytocin may be Helpful in Treating Psychiatric Disorders

The hormone oxytocin could be helpful in treating psychiatric disorders like autism and schizophrenia, a new study suggests
Advertisement
<< Mechanisms of Ibrutinib Resistance Identified in the Treatm...
Protection from Obesity With Stomach Bacteria >>

A-Z Drug Brands in India Blood Donation - Recipients Find a Doctor Find a Hospital Calculate Ideal Weight for Infants Drug Side Effects Calculator Accident and Trauma Care Drug Interaction Checker Selfie Addiction Calculator How to Reduce School Bag Weight - Simple Tips
This site uses cookies to deliver our services. By using our site, you acknowledge that you have read and understand our Cookie Policy, Privacy Policy, and our Terms of Use