Understanding About Sensory Organs in Fingertips may Help Fight Pain 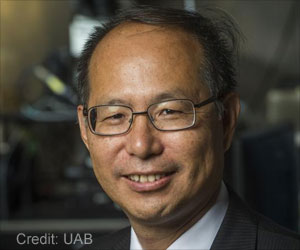 Small sensory organs in the fingertips called Merkel discs help distinguish different textures. Researchers from The University of Alabama at Birmingham have unraveled how the sensory information is processed in the Merkel discs and further conveyed to the ending of a sensory nerve, the start of its journey to the brain.

Such molecular understanding about the sensory information transmission between Merkel cells and nerve endings may lay the foundation to treat the intense pain felt by patients with a gentle touch of their inflamed skin -- a pathological pain known as tactile allodynia. This knowledge may also point to how diabetes patients lose their sense of touch. And this new knowledge may lead to preventive care.

People over the age of 55 in the United States often complain about hip or knee pain. Simple lifestyle habits can reduce the strain placed on the joints.
Advertisement
‘Knowledge about sensory information transmission between Merkel cells in the fingertips and nerve endings may lay the foundation to fight pain.’

"Cancer patients often have touch-induced pain after chemotherapy," said Gu, the Edward A. Ernst, M.D., Endowed Professor in the UAB Department of Anesthesiology and Perioperative Medicine. "Touch-induced pain is also commonly seen in clinical conditions such as fibromyalgia, traumatic injury and in inflammation from sunburn. Our new findings may have profound implications in these conditions."


A Merkel disc consists of a Merkel cell and a closely associated nerve ending that branches from a single sensory nerve. Until recently, it was unclear how the physical pressure of a light touch gets transduced from a mechanical force to an electrical nerve signal in Merkel discs.

One protein with a critical role in mediating epigenetic changes is methyl-CpG-binding protein 2 (MeCP2) which can regulate the expression of a large number of genes.
Advertisement
In 2014, a team of researchers lead by Jianguo Gu, Ph.D., of the University of Alabama at Birmingham, overturned the common assumption that transduction from the mechanical force takes place at the endings of the sensory nerves in Merkel discs. Instead, as he reported in the journal Cell, that mechanical transduction at Merkel discs initiates primarily in the Merkel cells. His team further pinpointed that a new ion channel in the Merkel cells -- called Piezo2 -- is the mechanical transducing molecule.

Now Gu and colleagues have discovered how the signal transduced by Piezo2 is passed from the Merkel cells to the nerve endings. They report in Proceedings of the National Academy of Sciences that the Piezo2 transducer triggers Merkel cells to release the neurotransmitter serotonin. This serotonin crosses the tiny gap to the nerve ending, where it activates 5-HT receptors and triggers nerve impulses.

Such gaps from one nerve cell to the next are called synapses, and they are conventional in neural communication. The newly discovered Merkel cell-nerve ending synapse is unique, Gu says, "because it is the only example of a synapse formed between a non-neuronal cell and a nerve cell, and it is the first synapse that is found underneath the skin."

Other types of sensory nerves from the skin -- which detect sensations like heat, cold or pain -- have their first synapse at the point where the sensory nerve meets the spinal column.

Elucidation of a Merkel disc serotonin synapse in the skin opens several areas for future investigation.

"The serotonergic transmission in the epidermis, probably like that in the central nervous system, can be regulated by factors affecting serotonin uptake and release," Gu and colleagues write in their PNAS paper.

"This raises an interesting issue as to whether serotonin uptake inhibitors, such as cocaine, methamphetamine and other recreational drugs in this category, may act at the epidermal serotonergic synapses to alter tactile sensations. It would also be interesting to know whether the epidermal serotonergic transmission may be altered under pathological conditions in patients with diabetes, tissue inflammation and undergoing chemotherapy, because tactile dysfunctions including mechanical allodynia and reduced tactile sensitivity are commonly observed in these patients."

In humans and other primates, Merkel discs are concentrated in the fingertips, and lesser numbers are also found in other areas of the skin.

"They can sense the wind blowing on your skin," Gu said.

Intriguingly, Merkel discs in non-primate mammals are concentrated in whisker hair follicles at the base of their whisker hairs. Thus, a mouse whisker can act as a model for a human fingertip.

"Non-primate animals can use their whiskers to sense texture, shape and other physical properties of an object," Gu said. "A manatee has whiskers over its entire body. Bats have whiskers, too, to detect aerodynamic changes in flight."

Australian regulatory body (TGA) has issued miscarriage warnings for the use of popular painkillers during pregnancy.
Advertisement
<< Unvaccinated Adults Cost the US Economy About $7.1 Billion
Hypothyroidism Patients Have Nagging Symptoms Despite Medica... >>

Racial Disparity in Opioid Prescriptions for Emergency Visits for Pain