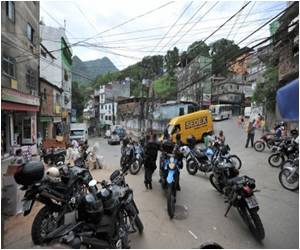 The UN said on Tuesday that the gap is widening between the rich and poor in much of Latin America, the world's most economically unequal and its most urbanized region.

The richest 20 percent of the population now earn on average nearly 20 times more than the 20 percent poorest, a study by the UN Human Settlements Program (UN-HABITAT) found.

There is good news for Europeans as the use of the age-old natural South American sweetener, stevia has received regulatory approval.
Advertisement

"The main challenge is how to combat such huge disparities in the cities," where eight out of ten of Latin America's 589 million people live, said Erik Vittrup, the UN-Habitat expert who presented the report.


Inequality has grown in Colombia, Paraguay, Costa Rica, Ecuador, Bolivia, the Dominican Republic, Argentina and Guatemala, according to the study, with Guatemala claiming the title as the country with the greatest disparity between the rich and poor.

The capital of Argentina, home to cowboy culture and the brutally macho tango dance, has just thrown open the doors to Latin America's glossy first five-star hotel for gays.
Advertisement
The countries with the most equitable spread of riches are Venezuela, Uruguay, Peru and El Salvador.

"Income inequality is extremely high. There is a considerable job deficit and a large labor informality affecting mainly the young and women," the UN said.

Despite some progress recorded over the past decade, 124 million people live in poverty in Latin America and the Caribbean cities.

More than half of them live in either in Brazil or Mexico.

Urban areas are projected to keep growing, with nearly nine of ten people expected to live in cities by 2050, the study said, though the pace of the rural exodus has been slowing.

"Migrations are now more complex and occur mainly between cities, at times across international borders," the UN said.

However, the agency warned that cities are becoming increasingly less compact, expanding physically in an "unsustainable" pattern.

The study, titled "State of the Cities of Latin America," found the urbanization rate is the highest in the farthest south, followed by Andean countries and Mexico, then the Caribbean and Central America

It also noted a sixfold increase in the number of cities in the region over the past half century, with half of the urban population living in cities with fewer than 500,000 people.

The 50 main cities of Latin America have an annual GDP of more than $842 billion and are the engines of the regional economy.