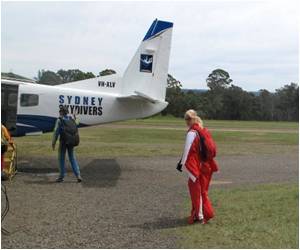 It has been revealed that a large number of old women are attempting skydiving after being inspired by the Queen's stunt during the Olympics opening ceremony.

According to the bosses of wish.co.uk, the act where her majesty's stunt double jumped out of a helicopter as part of the Olympics opening ceremony has bought out the thrill-seeker in many of the UK's older generation.

With a view to protecting customers, the skydiving industry has been ordered to ensure that all staff undergoes a drug test.
Advertisement

"Until recently our older customers tended to go for the afternoon teas," the Daily Star quoted a spokesman for the dream-making firm as saying.


The spokesman also revealed that they have seen an increase in interest among many mature customers, who are enquiring about extreme experiences.

"We're putting it down to the Queen's stunt. One wheelchair-bound lady even wanted to wing walk," the spokesman said.

"As long as they bring a doctor's note with them we can make it happen," he added.

Rickshaw Stunt From Kabul To Istanbul

A German woman and her Canadian boyfriend are facing the odds against Taliban by embarking on a most dangerous road trip to bring circus to children in Afghanistan, Iran and Pakistan.
Advertisement
<< Serbia's Gay Activists Vow Not To Give Up
Meditation Improves Empathy >>

Cannibalism Stunt to be Aired by a Dutch Broadcaster

A Dutch broadcaster has revealed their plan of airing a gory show of cannibalism where two presenters will eat a small piece of one another's fried flesh.