Ugandan Artists Put Up a Play to Address Gay Taboo 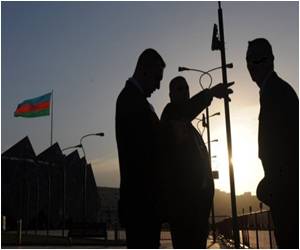 Friends Samson and Olu share a beer and a moment of confidence after a game of pool at a typical Ugandan bar.

"Olu, you know I'm gay," Samson confides haltingly, with the admission sparking a chain of events that tears his existence as a successful businessman apart.

Thousands march in Prague on Saturday in fancy dresses during the climax of Gay Pride Festival, using the occasion to condemn the sentencing of Russia's Pussy Riot punk band.
Advertisement

The scene is a central moment of tension in a new play staged in Uganda.


The play -- titled "The River and The Mountain" -- is one of the first to examine the taboo subject of homosexuality in the country and the motivations behind a proposed legislation that would see some homosexual acts punishable by death.

The Kingdom of Saudi Arabia has objected to a proposed new Internet address ending with .gay.
Advertisement
Homosexuality is illegal in Uganda, but a bill re-introduced to parliament earlier this year has attracted heavy criticism for the draconian penalties it contains.

Although legislators have said the bill could be changed, in its current format, anyone caught engaging in homosexual acts for the second time, or engaging in gay sex where one partner is a minor or has HIV would be sentenced to death.

Public discussion of homosexuality -- including by rights groups -- would attract of up to seven years in jail.

In this unwelcoming atmosphere, the play has faced official obstacles from Uganda's craven bureaucracy.

The country's media watchdog slapped a temporary ban on it, saying that the script needed to be examined, and the country's national theatre has refused to stage scheduled performances.

Those involved with the play have however ignored the ban to perform at private venues around Kampala. They say actors should be able to pose uncomfortable questions.

"As artists, we see an issue that society ignores and we bring it up," said Okuyo Joel Atiku Prynce, who plays the lead role of Samson in the play.

"Look at the state of our roads, look at our schools, look at our hospitals and tell me if homosexuality is to blame for all this," Prynce told AFP after a preview performance of the play.

Homophobia is widespread in Uganda and gay men and women in the country face frequent harassment and threats of violence.

While discussion of homosexuality has traditionally been taboo in Uganda, the anti-gay bill has pushed the issue to international prominence.

Angella Emurwon, the play's director, said the performances could help further the debate.

"Theatre has the ability to make you forget yourself and get into someone else's story," said Emurwon, who spent almost two months rehearsing the play.

"We use things like humour to lower the anxiety, and if you're able to laugh with someone, it means that you become more open to hearing what they have to say."

The anti-gay campaign has been fuelled by evangelical churches, both within Uganda and from the United States, and those who challenge their motives are often accused of promoting homosexuality.

But some of those working to quash the controversial bill were honoured as "brave men and women" by US Secretary of State Hillary Clinton in early August, when on a visit to Uganda she gave a rights coalition a "Human Rights Defenders Award."

Clinton noted the "difficult, even dangerous circumstances" the group's members face, and that their "lives are threatened, friends and family intimidated."

However, the play's author rejects claims that the play is either pro- or anti-gay, and says it instead focuses on how groups -- from venal politicians to unscrupulous pastors -- can manipulate issues to their own ends.

"What the play is trying to do is dramatise a situation where prejudice becomes a valuable thing, and how you can make political and financial capital out of it," says Beau Hopkins, the play's British writer.

"It deals with this hornet's nest of religion, politics and economics and how our attitudes are sold to us."

With homosexuality still an incendiary subject in Uganda, lead actor Prynce says that he is under no illusion that one small production will alter attitudes.

"It won't change the whole country overnight, but if it makes one person question what they think, then it will at least have done something," Prynce said.

A poll published Tuesday revealed nearly two-thirds of the French back gay marriage, as Catholic bishops urged their followers to pray for the maintenance of traditional family standards.
Advertisement
<< Guidelines for the Elderly That can Protect Against Falls
State Tax Incentives Have Not Made a Difference to Rate of ... >>