Type Numbers to Feel a Word 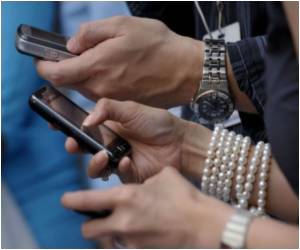 Typing numbers on the mobile phone keypad that correspond to letters can actually activate the meaning and feeling of the word in our minds and make one feel good, published in a study. Few of the words are 5683 for "love" , 54323 for "Liebe".

German psychological scientist Sascha Topolinski conducted a series of experiments to determine this, including one where he gave a cell phone with stickers obscuring the letters on the keypad to a group of several dozen professionals and asked them to type number sequences that correspond to words.

The Magic of Numbers?

Born on 11.01.11, at 11 am 01 minute 11 seconds. Too much of a coincidence? Not exactly. Just a planned event, supported by cooperative doctors.
Advertisement

The participants in the experiment were told the study was looking at the ergonomics of different number sequences on phone keypads. Ergonomics is the science of fitting workplace environments and tools to users.

Children who are fluent at text messaging have better literacy skills than youngsters who do not use mobile phones, scientists have said.
Advertisement
The study participants also typed "negative" number sequences on the keypad -- things like 7245346 for "Schleim," which is close to its English equivalent, "slime," or 35363 for "Elend," or misery.

After they had tapped out the numbers, participants were asked to rate on a scale of zero to 10 how pleasant an experience they had doing it.

"This finding suggests that the affective meaning of emotional words can be induced by merely dialing numbers that imply those words via key concordance," the study says.

Topolinski also looked at whether people's attitudes toward a person or business can be shaped by a phone number.

For that experiment, participants were given four phone numbers that included a numerical combination that corresponded to a business, such as 5683 or "love" for a dating agency, and four that did not.

When they got through to the number, they heard a message on an answering machine along the lines of: "This is Miller's dating agency. Here you'll find love!" and were asked to indicate how attractive the company was to them on a scale from zero (very unattractive) to 10 (very attractive).

1.5m Brits are So Attached to Their Mobile Phones That They Prefer It Placed Inside Their Coffin!

Attachment to mobile phones is so deep for about 1.5 million Britons that they would like their mobile phones to be placed inside their coffin.
Advertisement
<< New Eye Movement Tracking Device
Job Re-entry for Cancer Survivors Eased by Multiple Interve... >>

Research: How Kids Adapt Their Mental Number Line Affects Their Memory for Numbers

Accident and Trauma Care Blood - Sugar Chart How to Reduce School Bag Weight - Simple Tips Turmeric Powder - Health Benefits, Uses & Side Effects Noscaphene (Noscapine) Selfie Addiction Calculator Find a Hospital Loram (2 mg) (Lorazepam) Iron Intake Calculator The Essence of Yoga
This site uses cookies to deliver our services. By using our site, you acknowledge that you have read and understand our Cookie Policy, Privacy Policy, and our Terms of Use