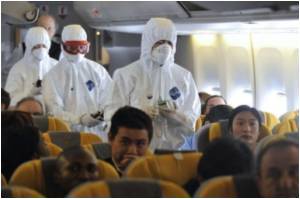 Two people infected with swine flu were in critical condition Friday in a Hong Kong hospital, according to health officials, one and a half years after an outbreak that killed 80 people in the city.

"A 21-year-old female is in critical condition after contracting swine flu", a spokeswoman for Hong Kong's Queen Elizabeth Hospital told AFP on Friday.

The woman, from mainland China, was admitted to hospital on January 11 and transferred to the intensive care unit on Tuesday, the spokeswoman said, adding that she could not confirm in the woman was infected outside the city.


Also Tuesday, a two-year-old girl was placed in the hospital's intensive care unit after she contracted the illness, the spokeswoman said.

Hong Kong is very nervous about infectious diseases following the outbreak of the SARS virus in 2003, which killed 300 people in the city and a further 500 around the world.

Is the world in the grip of its first influenza pandemic in forty years? It definitely seems so! The current swine flu or pig flu disaster traces its origin to the badly- hit State of Mexico.
Advertisement
<< Video Games Won't Make Your Kids Fat: Study
Researchers Grow Human Liver Tissue in Lab For Transplantat... >>

The real challenge lies in convincing people about the goodness of the vaccine as a step towards disease control and public health preparedness.

Sinopril (2mg) (Lacidipine) Post-Nasal Drip The Essence of Yoga Color Blindness Calculator Sanatogen Accident and Trauma Care Daily Calorie Requirements Find a Hospital A-Z Drug Brands in India Noscaphene (Noscapine)
This site uses cookies to deliver our services.By using our site, you acknowledge that you have read and understand our Cookie Policy, Privacy Policy, and our Terms of Use  Ok, Got it. Close
×