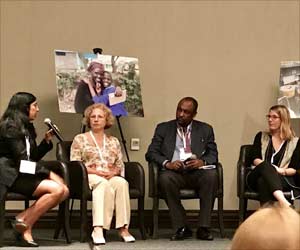 Two new drugs for tuberculosis treatment have been developed and its ongoing Phase-1 clinical studies have been announced on the eve of the 48th Union World Conference on Lung Health.

The conference is being held in Guadalajara, Mexico, the Global Alliance for TB Drug Development (TB Alliance).

Advertisement
‘Tuberculosis treatment is too lengthy and is not very effective in different programmatic settings. Therefore, there is an urgent need for better drug regimens.’

Both compounds have proceeded through early pre-clinical development and were granted "Investigative New Drug" status by the US Food and Drug Administration.


TBA-7371 and Sutezolid are the two new additions to the sparse pipeline of new antibiotics against a disease that not only kills 1.8 million people every year, but is also becoming increasingly resistant to the older drugs.
Advertisement
With resistance to current TB treatments continuously growing, the need for compounds with no pre-existing resistance increases. That is why these two drugs entering human studies give great hope.

TBA-7371 is an antimicrobial compound that belongs to a novel class of drugs known as DprE1 inhibitors, of which there are two other compounds in early development. Its mechanism of action is cell wall disruption.

With no pre-existing resistance or cross-resistance with other TB drugs, TBA-7371 could have significant potential in the treatment of TB. Phase-1 study for this began in August 2017.

Sutezolid, whose phase-1 study started in September 2017, is an oxazolidinone, a class of drugs that has already shown evidence of clinical activity against TB.

The oxazolidinone, linezolid, has shown promising results as part of the Nix-TB study testing a treatment for extensively drug-resistant TB (XDR-TB). However, the toxicity associated with long term administration of linezolid can be problematic.

TB Alliance and the Medicines Patent Pool have already announced a sub licensing agreement for the development and commercialization of sutezolid for the treatment of TB.

It would be pertinent to mention here that two other TB treatment regimens put forward by TB Alliance:

"While we still have a way to go before we arrive at a universal cure for this disease, we have building blocks coming through the research pipeline that show us we can get there," said Dr Mel Spigelman, President and CEO of TB Alliance, in the stakeholders' meeting covered by CNS (Citizen News Service).

The current TB treatment is too lengthy, too toxic and not effective enough in different programmatic settings. Hence there is an urgent need for better drug regimens. But perhaps a harder battle begins after getting a drug approved.

Development plans for uptake of novel regimens must be implemented without avoidable delays and address usage that will have a meaningful impact.

India Government to Add More AIDS, TB Drugs to Essential Medicines List
India has about 2.2 million TB patients, the highest in the world, and an estimated 2.1 million are ...

Dip in Stocks of TB Drugs in India, Says WHO
There is a dip in the buffers stock of anti-tuberculosis (TB) drugs in India, says the World Health ...