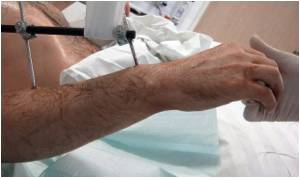 New combinations of postoperative pain treatment decreased both pain and the use of narcotic pain relievers.

This is according to two studies presented this week at the 2013 Clinical Congress of the American College of Surgeons. One pain treatment utilized the simple but nonstandard application of ice packs after major abdominal operations in patients, and the other treatment was a prolonged drug delivery method using nanotechnology in animals.

Past research has shown that postoperative pain is often undertreated.* The standard pain treatment after most major operations is narcotics, also called opioids, such as morphine. However, these medicines have many possible side effects, including sleepiness, constipation, andwhen used long termthe risk of drug dependence.


"A growing body of scientific evidence shows that narcotics may not be the best way to control pain," said the principal investigator of the ice pack study, Viraj A. Master, MD, PhD, FACS, associate professor of urology at Emory University School of Medicine, Atlanta. "We now know that it is more effective to use combination treatments that reduce the amount of narcotics needed."
Advertisement
New use for ice following open abdominal procedures

Multiple studies have found that cryotherapyapplication of ice to the surgical woundis safe and effective at reducing pain after some types of operations, such as orthopedic procedures. However, researchers have not studied the use of cryotherapy in patients undergoing major, "open" (large-incision) abdominal operations, Dr. Master explained.

For the Emory study, Dr. Master and his colleagues compared the effect on postoperative pain of applying soft ice packs to the incision area after open abdominal operations (27 patients), versus no ice application (28 patients).

Patients in the cryotherapy group applied ice packs to the wound at desired intervals for at least 24 hours. They also had the option of taking prescribed opioids, whereas the other group received only opioids for pain relief. Twice a day the patients rated their pain intensity on a line indicating a range from no pain (zero) to severe pain (100).

The results showed that patients who used ice packs reported significantly less pain than those who did not ice their surgical wounds. On average, the cryotherapy group had about 50 percent less pain on the first and third days after the operation compared with the no-ice control group, according to the investigators. In addition, on the first postoperative day, the cryotherapy group used 22.5 percent less opioid pain medication than controls, while some patients who iced reportedly used no narcotics.

According to Dr. Master, surgeons should recommend that their patients who have open abdominal operations intermittently apply ice packs to the surgical wound, removing the ice when it becomes too cold. "An ice pack," he said, "is safe and inexpensive, gives the patient a sense of empowerment because it is self-care, and doesn't require high-tech devices."

The pain treatment utilized in the second study used a high-tech devicenanoparticlesto create a controlled-release delivery system for the nonopioid numbing medication lidocaine. Although the effects of lidocaine injections usually are short-lived, nanotechnology allowed researchers at Houston Methodist Research Institute to extend the drug's delivery time so that pain relief lasted all seven days of the study.

Led by Jeffrey L. Van Eps, MD, a research associate at the institute and general surgery resident at Houston Methodist Hospital, the research team developed an injectable hydrogel containing lidocaine. The gel also held microscopic spheres of a biodegradable polymer called polylactic-co-glycolic acid (PLGA), which the U.S. Food and Drug Administration has approved for drug delivery. This polymer acts as an "envelope" for nanoparticlesmolecular-sized structuresof the mineral silica, whose spongelike holes take up the lidocaine gel, Dr. Van Eps explained.

"Nanotechnology with PLGA makes an ideal drug delivery system because we can tailor the nanoparticles to allow prolonged delivery," Dr. Van Eps said. He said that this method re-duces or avoids side effects.

After first testing their lidocaine delivery system in the laboratory, Dr. Van Eps' team obtained results in an animal model of postoperative pain. In groups of rats under different experimental conditions, the investigators rated the animals' pain by measuring their withdrawal response to mechanical force applied around the surgical wound.

Rats that received lidocaine gel through the novel delivery system needed twice the amount of force to elicit a pain response compared with control rats that received no pain medication after the incision, the researchers reported. Using this same technique of measuring the pain response, the investigators reported that the lidocaine gel also was superior to daily treatment with nonsteroidal anti-inflammatory drugs (NSAIDs) alone.

The best study results were seen with combination therapy using lidocaine gel and daily NSAIDs. This combination therapy reportedly showed equivalent effect to daily opioid narcotic treatment by mechanical-force withdrawal testing and superior results by daily scoring of pain-related adaptive behaviors. This finding is important because it shows that the experimental drug delivery system is not inferior to standard opioid treatment of pain, according to Dr. Van Eps.

Studies in larger animals will take place before the research team can test this therapy in patients, he said. Yet he called the new technology an "exciting potential treatment of post-surgical pain, the largest barrier to successful postoperative care."

The research team developed and is testing the drug delivery system in the Houston Methodist Research Institute's Surgical Advanced Technology Lab, which was created to accelerate transition of new products to the clinic.

Post-Operative Pain Following Tonsillectomy can be Easily Managed Through Over-The-Counter Pain Relievers
A new study reveals that patients who undergo surgery to remove their tonsils do not require a ......

OTC Muscle and Joint Pain Relievers Linked to Chemical Burns: FDA
The US Food and Drug Administration has warned the public that using over the counter muscle and ......

Mid-Adolescence Is Peak Risk for Extramedical Use of Pain Relievers by Young People: Study
According to a report surveys of U.S. adolescents suggest that there is an estimated peak risk of .....