Two Million Tons of Milk to be Fortified to Fight Malnutrition 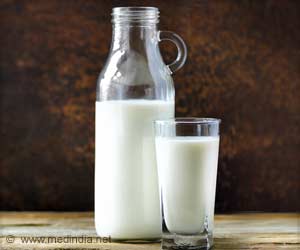 Two million tonnes of milk is going to be fortified in the next 23 months to reach 30 million consumers as a strategy to tackle malnutrition.

The Milk Fortification project is a joint initiative of the World Bank, Tata Trusts and National Dairy Development Board (NDDB).

Kwashiorkor is caused by severe protein malnutrition and is characterized by collection of fluid (edema) in the legs and belly. Kwashiorkor can be prevented by consuming a nutritious diet.
Advertisement
‘Milk is the best vehicle for fortification to fight malnutrition. So far, about one million metric tonnes of milk has been fortified.’

Inaugurating an awareness workshop on 'Sustaining Efforts of Milk Production in India' on Friday, National Dairy Development Board Chairman Dilip Rath said Vitamin A and D deficiencies were widely prevalent in India.


"Fortification of appropriate foods with Vitamin A and D is a viable strategy to tackle micronutrient malnutrition," he added.

What is skimmed milk and what are its health benefits? Get all nutrition facts on skimmed milk right here!
Advertisement
According to 2009 reports of the World Health Organisation (WHO) and United Nations Children's Fund (UNICEF), India bears the burden of more than a quarter of the world's Vitamin A deficient preschool children and more than 13 million susceptible infants to iodine deficiency.

According to National Family Health Survey-4 data, 38.4 per cent of children five years of age in India are stunted, 21 per cent wasted and 35.7 per cent are underweight.

"Milk in India has emerged as the best vehicle for fortification with its high volume of production, widespread distribution network, affordability and all around acceptability in the daily food habit," Rath pointed out.

"We are world's largest milk producing country and our per capita milk availability has now increased to 375 grams per day," he added.

Moreover, milk fortification was highly affordable and cost effective as it cost less than 2 to 3 paisa per liter, Rathid Rath said.

The fortification is strictly carried out as per the SOPs developed by NDDB and FSSAI and the milk federations and producers have to regularly submit reports to the Board.

According to the NDDB Chairman, of the 25 project proposals approved, fortification has been launched in 15 milk federations and trials have completed in 10 others. About one million metric tonnes of milk has been fortified so far.

What is almond milk? Is almond milk good for you? This plant based alternative to dairy milk has health benefits aside from alleviating symptoms of lactose intolerance, which will be discussed in this article.
Advertisement
<< Humans Eat 52,000 Plastic Pieces Every Year
Nurses Have a Higher Risk of Sleep Disorders: Study >>

More News on:
Pasteurization of milk Types of Milk Why Do We Eat - Nutrition Facts Diet Lifestyle and Heart Disease Types of Food Allergies The Acid-Alkaline balance, Diet and Health Acid Base Dietary Balance and its Influence on Our Health and Wellbeing Lactose Intolerance Malnutrition to Obesity - The Big Leap Surprising Benefits of Dairy