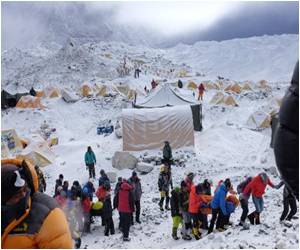 Few weeks after a massive 7.9-magnitude earthquake struck Nepal, two fresh tremors have been recorded in the Himalayan nation.

Reports said Sindhupal chowk and Dolakha districts, east of Kathmandu, was the epicentre of the tremors which triggered panic among people still recovering from the immense destruction unleashed by the quake on April 25. However, no damage was reported from the tremors.
Advertisement

The catastrophic earthquake has claimed nearly 8,000 lives and injured about 16,390.


At least 150 aftershocks, measuring 4 or more on the Richter scale, have been reported after last month's quake.

Emergency Vaccination Campaign Amid Fear of Measles Outbreak in Quake-Hit Nepal
UNICEF, WHO and the Nepalese government are targeting the urgent vaccination of over 500,000 ......