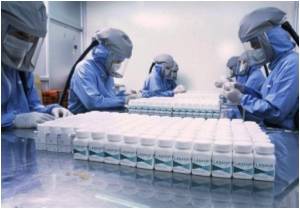 In a major breakthrough a group of French and American scientists have found that two tumor inhibiting drugs can increase the progression-free survival time for patients suffering from a rare type of pancreatic cancer.

The pancreatic neuroendocrine tumor is a rare form of pancreatic cancer though it has a better prognosis than the more common, and deadlier, form of cancer known as adenocarcinoma. While the progression free survival time for those with neuroendocrine tumor is just over five months, the researchers found that the two drugs, everolimus and sunitinib, increased it by more than six months.

Two kidney cancer drugs have been found to be good in the treatment of a rare type of pancreatic cancer.
Advertisement

The two separate studies were conducted among nearly 600 patients with 410 patients participating in the everolimus study, which was funded by Novartis Oncology, while 171 patients took part in the sunitinib study, funded by Pfizer.


All of the patients were suffering from inoperable or metastatic neuroendocrine pancreatic tumors. Nearly half of the patients involved in the study displayed some shrinking of the tumor compared to just over 20 percent of those who were placed on placebo.
Advertisement
"There certainly is the potential for patients to be on this everolimus for a long time. About 34 percent of patients were alive and progression-free after 18 months, compared to 9 percent of untreated patients. So the curve separated very early", lead researcher of the everolimus study, Dr James Yao said.

Pancreas transplant is a surgical procedure involving the replacement of a dysfunctional pancreas in a person ...