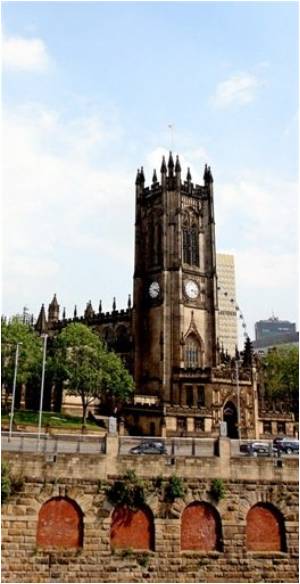 "Today is a Twitter Sunday so it's time to get your Twitter on," intones Brian Champness, the children's pastor of the Anglican church in the southwestern English seaside town of Weston-Super-Mare.

A report says that doctors in Britain are facing the increasing problem of infatuated patients trying to flirt or harass them by sending messages on social networking sites like Facebook and Twitter.
Advertisement

"If you have a question, tweet it and will see if we can get some questions answered," he tells the congregation.


Six flatscreen televisions hang from the pillars of the 100-year-old church showing the tweets of the faithful as Champness delivers his sermon.

A British lawmaker has said that existing laws may not be able to control offensive or anti-social behaviour on social networking sites likes Facebook and Twitter.
Advertisement
The church also has a wi-fi network with the password: "Abraham 123."

The project is the brainchild of Andrew Alden, the vicar of the church, who says that he is following in the footsteps of Christians from the past two millennia.

The youthful looking 47-year-old introduced Twitter Sundays at the start of the year and they now take place about once a month.

In most churches, using a smartphone or laptop during the Sunday service would be frowned upon at best.

But here, many members of the congregation are logged on. One teenager is updating his Facebook profile, a dad is looking up a recipe.

Others, meanwhile, are using the technology to give their reaction to the Sunday sermon.

"Can a feasting on positive words & blessing, & a fast on negativity change our town in 14 days? Lets give it a go!" says @rev2bshaz, a member of the congregation.

The tweet appears on the screens for everyone to see.

Then come more, like one from parishioner Charlotte Pike: "Is what you think the same as what you say? Can it have the same repercussions ?"

"Excellent question!" says Champness, whose iPad lies next to his red-leather covered Bible on his wooden pulpit.

The sermon "is not just a monologue where we just chair for half an hour, and this is the information we give you. It actually becomes a conversation, which is one of the way Jesus actually talked. He asked questions," Champness says.

The parishioners themselves have mixed views about mixing Twitter and the word of God.

"Otherwise you can kind of drift off and its like being at a lecture. If you are not taking notes, it does not really sink in. If I take notes during the talks, it helps me to concentrate on the talk better."

"I find it makes me consolidate what is being said into little snappy comments, so it makes me learn better," she said.

But Adrian Stone, 50, said it was "distracting".

"I want to listen, so I would do a small comment and stop. I'm not that good with technology," he said, adding that by the time he had thought about something to tweet, then typed it out and edited "the service is over."

"I talk a lot and I would not be able to make sense in 140 something characters!" she said of the social networking site's limit for individual postings.

Alden said it was necessary to take a 21st century approach in order to counter falling numbers of churchgoers and the growing disaffection with organised religion.

"Young adults are increasingly spare in the church in our nation. So using social media like Facebook, Twitter and YouTube is a way we felt that we could engage with that missing generation," he said.

"The message is the same, the medium is different."

The method is bearing fruit, he adds, with the congregation at St Paul's doubling in five years.

But he admits that many older constituents are reluctant to take part.

"There is a major hurdle here in terms of getting a mobile phone out in a public setting, they feel it's rude," he said.

The church also exercises some control over what gets tweeted during services.

Local doctor Mike Pimm monitors all the messages from his computer at the end of the nave to ensure that nothing inappropriate appears on screen.

This Sunday one of the censored tweets includes: "Is everybody smaller than our vicar?"

But he also keeps himself amused by letting some lighthearted tweets through.

Blood Pressure Calculator Find a Hospital Accident and Trauma Care Blood Donation - Recipients Drug Side Effects Calculator Nutam (400mg) (Piracetam) Vent Forte (Theophylline) Find a Doctor Indian Medical Journals Blood - Sugar Chart
This site uses cookies to deliver our services. By using our site, you acknowledge that you have read and understand our Cookie Policy, Privacy Policy, and our Terms of Use