Turn Up the Music to Feel All Pumped Up and Powerful 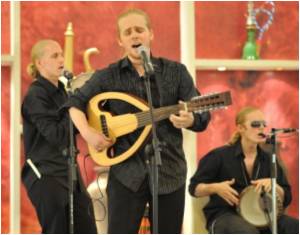 Listening to music, especially high levels of 'bass', helps one feel all pumped up and powerful, finds a new study.

Dennis Hsu from Kellogg School of Management at Northwestern University said that they had noted how athletes usually keep their earphones on while entering the stadium and in the locker room, as if the music was mentally preparing and toughening them up for the competition about to occur.

Curious with observations, the researchers wanted to find out whether music could truly transform the psychological state of the listener. They first pre-tested 31 pieces of music from several genres and identified the highest power and lowest power songs. Songs rated as powerful included Queen's 'We Will Rock You' and 2 Unlimited's 'Get Ready for This,' while songs rated lower in power included songs such as Fatboy Slim's 'Because We Can' and Baha Men's 'Who Let the Dogs Out.'


They further looked at how the highest and lowest rated power songs affected both people's sense of power and three previously identified psychological and behavioral consequences of power: the tendency to see the forest instead of the trees (thought abstraction), perceived control over social events (illusion of control), and the desire to move first in competitive interactions.
Advertisement
It was found that the high-power music not only evoked a sense of power unconsciously, but also systematically generated the three downstream consequences of power. The researchers also ruled out lyrics as the cause of the effects, and found that those who listened to the heavy-bass music reported more feelings of power and generated more power-related words in the implicit task than those listening to the low-bass music.

The effects of the bass levels supported one possible explanation for why music makes people feel more powerful: the 'contagion hypothesis', which suggests that certain pieces of music might trigger powerful experiences because these experiences are often paired with that particular music.

The study is published in Social Psychological and Personality Science.

Big Business for Mozart's Salzburg in 'Sound of Music'
"The Sound of Music" has captured the imagination of movie-goers and musical fans with its catchy .....

Music Unlocks the Secrets of How Memory Works
Scientists have used hit music tunes including those of Elvis Presley, Abba and the Spice Girls to ....

Music Training may Boost Cognitive Skills
Functional brain MRI's have revealed that there is a possible link between early musical training .....