Turmeric Ingredient is a Panacea for All Ills: Study

Revered in India as "holy powder," the marigold-colored spice known as turmeric has been used for centuries to treat wounds, infections and other health problems. In recent years, research into the healing powers of turmeric's main ingredient, curcumin, has burgeoned, as its astonishing array of antioxidant, anti-cancer, antibiotic, antiviral and other properties has been revealed.

Yet little has been known about exactly how curcumin works inside the body.

Now, University of Michigan researchers led by Ayyalusamy Ramamoorthy have discovered that curcumin acts as a disciplinarian, inserting itself into cell membranes and making them more orderly, a move that improves cells' resistance to infection and malignancy.


"The membrane goes from being crazy and floppy to being more disciplined and ordered, so that information flow through it can be controlled," said Ramamoorthy, a professor of chemistry and biophysics. The findings were published online March 3 in the Journal of the American Chemical Society.

The research project melds Ramamoorthy's past with his current scientific interests. As a child in India, he was given turmeric-laced milk to drink when he had a cold, and he breathed steam infused with turmeric to relieve congestion.

Now as researcher he is fascinated with proteins that are associated with biological membranes, and he uses a technique called solid-state NMR spectroscopy to reveal atom-level details of these important molecules and the membranous milieu in which they operate.

"Probing high-resolution intermolecular interactions in the messy membrane environment has been a major challenge to commonly-used biophysical techniques," Ramamoorthy said. His research group recently developed the two-dimensional solid-state NMR technique that they used to probe curcumin-membrane communication in this study.

Ramamoorthy's group now is collaborating with chemistry professor Masato Koreeda and U-M Life Sciences Institute researcher Jason Gestwicki to study a variety of curcumin derivatives, some of which have enhanced potency. "We want to see how these various derivatives interact with the membrane, to see if the interactions are the same as what we have observed in the current study," Ramamoorthy said. "Such a comparative study could lead to the development of potent compounds to treat infection and other diseases."

In a related line of research, Ramamoorthy's team is using the same methods to investigate the effects of curcumin on the formation of amyloids---clumps of fibrous protein believed to be involved in type 2 diabetes, Alzheimer's disease, Parkinson's disease, and many other maladies. In addition, the researchers are looking to see whether other natural products, such as polyphenols (compounds found in many plant foods that are known to have antioxidant properties) and capsaicin (a pain reliever derived from hot peppers), interact with membranes in the same way as curcumin.

Turmeric may Drastically Reduce Heart Failure
The yellow colored turmeric one of the major spices in Indian food is found to greatly reduce the chances of developing heart failure, say researchers at the Toronto General Hospital.
READ MORE 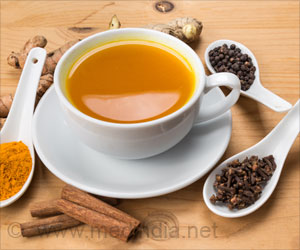