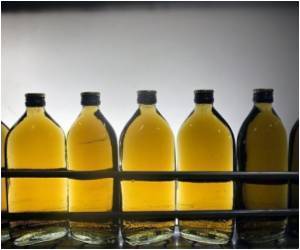 The row broke over a regulation issued last week said to be aimed at protecting public health and the well-being of children and young people.

"This kind of mentality is unacceptable... An oppressive mentality is seeking to control Turkey," said Akif Hamzacebi, a senior member of the main opposition CHP party, according to Anatolia news agency.


The new rules "aim to make life difficult for those who want to drink and thus to force them to change their lifestyle," columnist Mehmet Y. Yilmaz wrote in the mass-selling Hurriyet daily.

Take this anonymous self-test to evaluate your alcohol consumption and determine if your drinking pattern poses a risk for hazardous health conditions.
Advertisement
The head of the Tobacco and Alcohol Market Regulatory Board, which issued the regulation, rejected the accusations.

"It is not true that (alcohol) sales are being restricted... There is absolutely no restriction and no ideological dimension to the issue," Mehmet Kucuk said in a television interview.

The ruling Justice and Development Party, the offshoot of a banned-Islamist movement, is often accused of seeking to reinforce the role of Islam in Turkey and undermine the country's secular system, charges that it strongly denies.

The regulation curbs the advertising of booze and tightens rules on how alcohol is displayed in shops, and sold or served in the public realm.

It prohibits authorised sellers from taking alcohol outside their premises, making it harder for catering companies to organise wedding parties or similar gatherings.

Alcohol is banned from events for "children and young people", like concerts or festivals, with the age barrier kept as high as 24.

One provision says alcoholic beverages cannot be distributed for free or as presents and promotion.

The regulation bans the advertising of alcohol on television and radio, while stating that printed advertisements should not associate drinking with the celebration of special days.

The new rules have forced Turkey's internationally renown basketball team Efes Pilsen to look for a new name to replace the beer brand it currently bears.

In 2007, the government attempted to designate "red zones" outside cities for establishments serving wine and spirits, but one of Turkey's top courts scrapped the regulation.

Daily Calorie Requirements Vent Forte (Theophylline) How to Reduce School Bag Weight - Simple Tips Calculate Ideal Weight for Infants Sanatogen Find a Doctor Nutam (400mg) (Piracetam) Blood Donation - Recipients Drug Interaction Checker The Essence of Yoga
This site uses cookies to deliver our services.By using our site, you acknowledge that you have read and understand our Cookie Policy, Privacy Policy, and our Terms of Use  Ok, Got it. Close
×