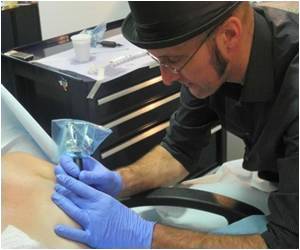 US researchers have successfully tested a capillary "smart bomb" that simultaneously attacks cancer and boosts the immune system.

The tiny hollow spheres, called nanolipogels (NLGs), become trapped in leaky tumour blood vessels, where they unleash an anti-cancer drug. At the same time the spheres release a protein that triggers the body's own defences.

Researchers tested the spheres in mice on melanoma skin cancer that had spread to the lungs and found that tumour growth was significantly delayed and the survival of the mice increased.


The new technology overcomes a problem with cancer treatment that has been difficult to tackle using conventional therapies, said the scientists.

Laryngeal cancer is also called cancer of the larynx or throat cancer or laryngeal carcinoma. It usually affects men over the age of 55 years.
Advertisement
Cancer tumours are known to secrete chemicals that confuse the immune system.

But attempts to boost patient immunity while at the same time neutralising the cancer's chemical arsenal rarely work.

The NLGs, described in the journal Nature Materials, package together two completely different kinds of molecule.

One is designed to overcome a potent cancer defence weapon called TGF-beta, which stunts the local immune system.

The other, an interleukin signalling molecule, boosts immune system activity.

"One problem with current metastatic (spreading) melanoma immunotherapies is the difficulty managing autoimmune toxicities when the treatment agents are administered throughout the body," Sky News quoted researcher Dr Stephen Wrzesinski, from Yale University School of Medicine in the US, as saying.

"The novel nanolipogel delivery system we used will hopefully bypass systemic toxicities while providing support to enable the body to fight off the tumour at the tumour bed itself," he noted.

Each NLG is small enough to travel through the bloodstream, but large enough to get entrapped in leaky cancer blood vessels. Once trapped, they biodegrade to release their cargo.