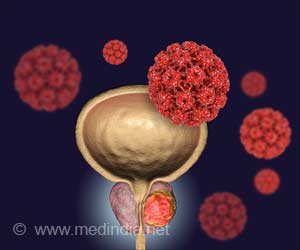 Understanding how the tumor has evolved can assess the aggressiveness of prostate cancer accurately, which helps determine what type of treatment can be given to the patient, reveals a new study.

The findings from Canadian Prostate Cancer Genome Network (CPC-GENE) researchers and their collaborators have published their study in Cell.

Auditory Tumor or Acoustic neuroma is a benign growth that arises on the vestibular cochlear nerve. It is not a cancer. Read more on the causes, symptoms, diagnosis and treatment.
Advertisement
‘Evolutionary history of tumor can help predict the severity of prostate cancer accurately.’
Tweet it Now

The researchers analyzed the whole genome sequences of 293 localized prostate cancer tumors, linked to clinical outcome data. These were then further analyzed using machine learning, a type of statistical technique, to infer the evolutionary past of a tumor and to estimate its trajectory. They found that those tumors that had evolved to have multiple types of cancer cells, or subclones, were the most aggressive.


Fifty-nine percent of tumors in the study had this genetic diversity, with 61 percent of those leading to relapse following standard therapy.

"By incorporating time into the context of the existing knowledge we have about where a tumor is at diagnosis we were able to very accurately identify those patients whose prostate tumors needed no treatment, those men who could be cured by existing treatments, and those men who had very aggressive tumors and may have benefitted from novel therapeutic options," says Dr. Paul Boutros, Principal Investigator, Ontario Institute for Cancer Research and leader of CPC-GENE.

An abnormal growth of cells in the brain is called brain tumor. Most tumors arise within the brain (primary). They can be benign or cancerous.
Advertisement
"Clinical decision making in treating prostate cancer can be very difficult. These findings pave the way for a new tool to improve our ability to determine the best approach for each individual patient, including sparing patients from unnecessary treatment or over-treatment and the associated side effects," says Professor Robert Bristow, Director of the Manchester Cancer Research Centre at the University of Manchester U.K., formerly of the Princess Margaret Cancer Centre in Toronto.

"Tumors are a community of related cancer cells, and by examining their DNA using machine learning, we can gain insight into how they evolved from normal cells.

In this paper, we show that the past evolutionary history of a tumor helps predict whether that tumor will progress into an aggressive form," says Dr. Quaid Morris, Associate Professor, The Donnelly Centre for Cellular and Biomolecular Research, University of Toronto, who collaborated with the CPC-GENE team on the study.

"Prostate cancer is the most common cancer among men," says Reza Moridi, Ontario's Minister of Research, Innovation and Science. "Ontario congratulates this research team, whose work is pointing the way toward improved testing and treatment."

The study's findings are not its only contributions to prostate cancer research. The sequencing data generated during the course of the study are now freely available online to researchers worldwide to carry out further analyses, becoming the largest prostate cancer genomics resource available to-date.

CPC-GENE is a team of multidisciplinary researchers from across Canada working to crack the genetic code of prostate cancer. Through funding of approximately $20 million, research of this magnitude has been made possible through a partnership between the Movember Foundation, Prostate Cancer Canada, and the Ontario Institute for Cancer Research.

"From the tireless work of researchers to the selfless giving of donors, we applaud the efforts of everyone who has played a role in helping make CPC-GENE possible. Since its beginnings as an ambitious undertaking that was massive in scope, the goal of this project has been to greatly improve personalized care for men with prostate cancer. The findings published in Cell - widely considered one of the most prestigious and highest impact medical journals - represent a monumental stride towards that goal. Together, we will continue to advance this important work on behalf of the one in seven Canadian men who will be diagnosed with prostate cancer and their families."

Tumor lysis syndrome is a collection of metabolic abnormalities due to the tumor cell lysis in patients with treatment for malignancies.
Advertisement

PSA blood test is specific to prostate gland but not necessarily a cancer specific test but is commonly used ...