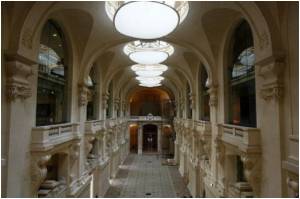 For many visitors to Lourdes are surprised that the saint whose visions of the Virgin Mary made the French town a major Catholic pilgrimage site is not actually buried there. The remains of Bernadette Soubirous are now the subject of a tug-of-war between those who want her brought home, and the town of Nevers where her body is preserved in a shrine.

Lourdes, in southwestern France, draws six million people a year to visit a shrine in a grotto where Mary is said to have appeared to the poor shepherd girl Bernadette 18 times in 1858, and to bathe in the purportedly healing waters of a spring in the cave.
Advertisement

"Ah really! That's a surprise," said Michel, a pilgrim visiting the grotto, upon learning that Bernadette's remains were not at the site, but 700 kilometers (435 miles) north in Nevers.


It was to this French town that Bernadette went to join a convent aged 22 to escape the crowds and attention after her visions, and it was there that she died aged 35.
Advertisement
"The time has come" to return her remains to Lourdes, argues Jose Marthe, a regional councilor who formed an association with descendants of the saint's family to lobby for her return. "Our intentions are pure."

But Nevers Mayor Denis Thuriot is not so sure. "It's obvious that the association, even if it denies it, is only looking to draw more tourists" to Lourdes, he said this week.

He deplored that "neither the association nor the descendants of Saint Bernadette have the heart to defend her memory or the wish of a woman who wanted to remain simple and anonymous, and found in Nevers a refuge and peace that today is being disturbed."

Marthe and the 300 members of the association, however, argue that Bernadette would have wanted to be laid to rest in Lourdes.

Benoit Casterot, a descendant of Bernadette's mother, is one of the association's leaders and says it "is absolutely logical that this local girl, our idol, return to Lourdes."

Another distant relative Francis Bayoumeu -- who married Bernadette's great grand-niece and runs her parents' house as a museum -- insists the saint "never wanted to leave Lourdes".

"Bernadette left under duress because of the media pressure," he said.

However the Sisters of Charity nuns charged with looking after her remains insist Bernadette came to Nevers of her own volition "to hide" and wanted to remain there.

"In 1957 Pope Pius XII definitively ratified the Church's position by confirming that Bernadette would be kept in Nevers," said the convent's Mother Superior Elisabeth de Tonquedec.

Pius had canonized Bernadette in 1933 after a long investigation into the apparitions convinced the Church they had indeed taken place.

Nicolas Joanne, director of a pilgrimage site in Nevers for those wishing to visit Bernadette's body, said moving her would not make spiritual sense.

"If we took Bernadette back to Lourdes she would become a curiosity. In Lourdes you have large processions... here it is a much more intimate encounter," he said.

Joanne said the 170,000 pilgrims who visited Nevers each year "say they want to meet the ordinary saint".

"She wouldn't tolerate being seen as a healer and she left Lourdes to avoid this misunderstanding," he said.

Nevers would also lose some 2.5 million Euros ($2.7 million) a year brought to the small town by the pilgrims if her body was moved, a study showed in 2012.

Mathias Terrier, communications director for the Lourdes pilgrimage site, said the campaign to return Bernadette was "in vain, quite simply because it is not in line with her wishes".

In historical records tracing conversations Bernadette had, she reportedly replied "Oh no, never" when a fellow nun suggested she return to Lourdes.

"There is no ambiguity," said Terrier. But to Marthe this is just "hearsay". "We don't know if it will take six months or six years but Bernadette will be back."

Surfing Paradise In France Takes A Hit After A Shark Attack Kills A Teenager
The 13-year-old Elio Canestri, one of Reunion's most promising young surfers, was killed after he .....

I Have Recovered, I Want To Ride A Bike: France's Artificial Heart Transplant Recipient
The 69-year-old man was terminally ill with a heart condition when he received the transplant, ......

France Approves Ban on Advertising for Artificial Tanning Beds, Salons
Tanning-induced melanoma is the second-fastest-growing form of cancer after lung cancer among ......

France Allows 'Terminal Sedation' Until Death, not Euthanasia
The French Parliament stopped short of legalizing euthanasia but voted a law allowing medics to ......