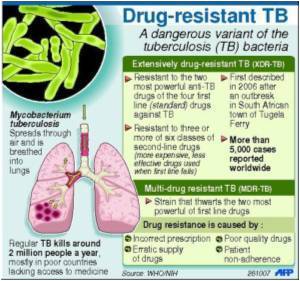 In this week's PLoS Medicine, Christian Lienhardt from the WHO in Geneva, Switzerland and colleagues announce that the Stop TB Partnership and the WHO Stop TB Department have launched the TB Research Movement.

The problem remains vast. The authors say that "With 9.4 million new cases of tuberculosis (TB) and 1.7 million TB deaths worldwide in 2009, TB constitutes an unacceptable burden of human suffering and loss. The tools available for TB control are old, lack effectiveness, and are not readily accessible in many settings: the diagnosis of pulmonary TB still relies in most high-burden countries on sputum microscopy, a century old technology; treatment of tuberculosis is based on drugs that are over 40 years old and requires direct supervision to ensure full treatment adherence and prevent drug resistance; and the only TB vaccine (BCG), first used in 1922, has a variable protective efficacy in adults. Novel tools are needed for better TB care and control worldwide."


The authors go on: "Through this strategic plan, the TB research movement is creating a framework for concrete actions to harmonize and synergize TB research efforts globally, so that the poor and vulnerable populations burdened by TB will reap the dividend of less TB through more research and innovation."

Patients with tuberculosis should eat a healthy diet so that they build up their immunity to fight against ...

Extra pulmonary tuberculosis is infection of tissues and organs other than the lungs by mycobacterium ...

Pleural effusion is the accumulation of fluid in the space between the two coverings (pleura) of the lung. ...