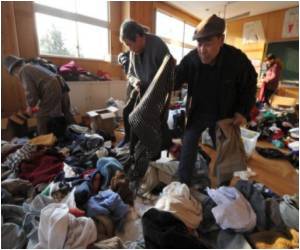 Standing among the sad ruins of her parents' tsunami-shattered home, Yoshie Kikuchi begins to acknowledge that they probably did not survive the enormous wave that smashed into Japan.

Ever since the March 11 disaster she has tried to hold on to the dim hope that they fled when the warning came and had sought safety in an evacuation centre, unable to make contact with their worried family.

Ten days after the tsunami disaster, towns away from the impact zone are experiencing shortages of basic necessities.
Advertisement

"I keep thinking that they lost their mobile phones or that they have no electricity so they can't charge their phones to call us," Kikuchi says.


"People say that they didn't have enough time to run, but I don't know."

Her father's employees have told the 28-year-old that her parents were at the office of the architecture firm just a few hundred metres from their house in Ishinomaki when the record 9.0-magnitude quake hit.

Animal rescue operations have begun in Japan.Animal welfare groups are undertaking rescue operations to find the lost animals and aid injured animals affected by the March 11 devastating earthquake and tsunami.
Advertisement
They then went home to collect some things and were last seen less than five minutes before the water crashed into the city. The twin quake and tsunami has left nearly 23,000 people dead or missing, but the grim toll keeps climbing.

Entire communities along the northeast coast were swept away.

"I think they knew the tsunami was coming, but they didn't think it was going to be this big," says Kikuchi.

"I think they thought... I don't know... I hope they went somewhere. Maybe they thought they had more time, but it came so quickly.

"There is a shelter just behind our house, so I hope they went there."

The last time Kikuchi visited her parents, it was New Year. The whole family gathered for a traditional celebration, with the three grown-up children all making a fuss of Gen, the dog.

It was nice for Kikuchi to be back at the house she grew up in, the house her grandfather built 70 years ago, with its cedarwood beams, tatami matting and Buddhist altar where incense was burned and offerings left for ancestors.

"We had a quite normal New Year with a lot of people visiting us and special meals," says Kikuchi.

"My parents are really peaceful people, really kind to others. They really like to help people. I think that's why everyone is looking for them now."

The shell of the house still stands, but the accumulated possessions of a lifetime are scattered.

Furniture is stuck incongruously in trees and books are strewn all around the garden. A fridge -- not theirs -- sits just inside the front door, dumped there by the wave that caked everything in thick, foul-smelling mud.

Here and there are photographs which Kikuchi eagerly picks up, only to gently put aside when she sees they belong to a family she does not recognise.

Then she strikes lucky. A single picture of her father standing with a business associate.

Tears well in her eyes as she gently wipes the mud from his face.

"Everything was here so I don't have any pictures of my parents," she says.

As she wanders among the debris, friends and neighbours stop to ask if she has heard anything.

Each has their own tale of the day the waves came. Each wishes her luck in her search.

She leaves the house clutching only the muddy picture and a letter she wrote as a teenager.

Kikuchi has travelled the 50 kilometres (30 miles) back to Ishinomaki from her home in Sendai only four times since the tsunami struck nearly two weeks ago.

The first two times her uncle had enough petrol to make the journey, but fuel shortages crippling the region have now made that impossible.

On the third occasion she queued for two hours to get a seat on a cramped bus. Earlier this week she travelled with an AFP team.

On each visit she has been to the city offices where folders of handwritten sheets show the names of those living in the more than 100 refuge centres dotted around the disaster zone.

"No, they're not here," she says, closing the folder after scouring it for her parents' names.

News that two survivors were pulled from the rubble of Ishinomaki on Sunday -- an 80-year-old woman and her 16-year-old grandson -- has raised hopes in the city.

"That was good news," says Kikuchi. "I think there is still hope. There are a lot of places you can't really contact because they don't have electricity, so I hope I can find my parents."

Kikuchi and her sisters are regularly checking Internet sites where people post information on those known to have survived -- or died -- in Japan's worst disaster for nearly a century.

"My sister and I have had regular calls from the authorities, we don't have any complaints. But we realise the huge task that this is. I'm sure if they find anything, we will know.

"I will keep on looking until I find them," she says.

"But it's been 10 or 11 days now so it's getting more difficult to believe that they are okay."

Spinach and milk found to have been contaminated with radiation in Japan are safe to eat and drink, says the World Health Organization.
Advertisement
<< Mums Who Drink Early in Pregnancy Raise Chances of Kids Bei...
Female Rockers Front the China's Rock and Punk Scene >>