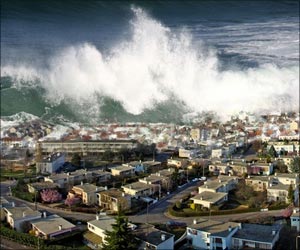 Rows of new houses and beautiful mosques with glittering minarets in Meulobah, Indonesia gives little clue that it that was closest to the epicenter of a monster earthquake that generated the killer tsunami waves a decade ago. It highlights the success of a multi-billion-dollar reconstruction effort. About $7 billion was paid out in aid in the following years, with more than 140,000 houses rebuilt across Aceh, and thousands of kilometers of roads, numerous new schools and health centers were built.

On December 26, 2004, thousands in Meulaboh were killed, houses were destroyed and trees uprooted when Tsunami struck the Aceh province, on the northern tip of Sumatra island. The only buildings left standing were few better-constructed mosques. As the roads were destroyed and communication lines wiped out, the town was almost cut off for weeks, leaving people desperately fighting for survival amid piles of rubble debris, reliant on air drops or deliveries by boat for food.

After the area was cleared of corpses and debris, people who were left homeless went to live in temporary shelters, where they waited several years for new houses. Roads were rebuilt wider and new houses and shops were constructed further from the sea to protect them from the danger of future tsunamis. Several double-storey buildings in the town centre now serve as emergency shelters.


People there are grateful for the help they received to rebuild their lives. Alaidinsyah, chief of West Aceh district which includes the town said, "Many non-governmental organizations and individuals from foreign countries and Jakarta came to help. Without them, Meulaboh would not have recovered."

Asian Tsunami Survivors Start a New Life
Fardhiah and Rusli Abdul Rahman had been neighbours for years when the Asian tsunami devastated ......