Truffles Not Contaminated With Radioactive Compounds 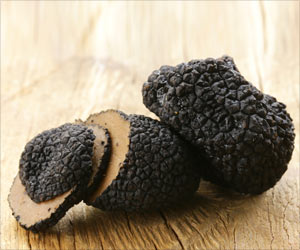 Truffles found in central Europe contain only negligible amounts of radioactive compounds and are safe to eat, say researchers. Truffles are fungi that range among the most expensive foods in the world.

A Swiss scientist has said that truffles, a luxury delicacy in French and Italian cuisine, may soon be adding flavour to blander dishes
Advertisement
‘Truffle is the fruiting body of a fungus. Truffles are called as "the diamond of the kitchen" as they are highly prized.’

Transported by winds and deposited by heavy rainfall, the cesium polluted large swathes of the European continent.


"Much of the continent's topsoil layers are still radioactively contaminated," says Ulf Büntgen, head of the dendroecology group at the Swiss Federal Research Institute (WSL) and lead author of the study.

Try Truffles and Foie Gras With A Movie

In the hipster hotbed of Williamsburg, Brooklyn, old fashioned junk food won't cut the moviegoer's mustard.
Advertisement
That, however, does not seem to affect the subterranean Burgundy or summer truffles (Tuber aestivum), which are highly prized as a delicacy for their hazel-nutty flavor and intense aroma.

"We were very positively surprised that all specimens we analyzed exhibited insignificant values of 137Cs," said Büntgen in a paper published in Biogeosciences, an open access journal of the European Geosciences Union (EGU).

This result is surprising because many types of fungi, including truffles, grow underground in - and draw nutrients from - soil prone to accumulating radioactive pollution.

Deer truffles, for example, a type of 'false' truffles (not of the tuber genus) more appealing to deer or wild boar than to humans, range among the most contaminated fungi.

The team says that in regions where the radioactive fallout after Chernobyl was most intense, not only mushrooms but also higher components in the food chain, including game meat of red deer and wild boar, still have excess values of 137Cs.

The researchers analyzed 82 Burgundy truffles collected across Europe between 2010 and 2014.

The samples were harvested by trained truffle dogs in several natural habitats and plantations in Switzerland, Germany, France, Italy and Hungary.

All samples had negligible radioactivity, with 137Cs values ranging below the detection limit of two becquerels per kg.

This is far below the tolerance value of 600 becquerels per kg, meaning the truffles are safe for consumption, at least in the areas the researchers sampled from.

Chefs and French Presidents Hang Up the Aprons

In a two-day cookout for the European leg of the Bocuse d'Or contest, knighted the Olympic Games of the food world, twenty emerging chefs faced off in Brussels on Tuesday.

The Essence of Yoga Find a Doctor Vent Forte (Theophylline) A-Z Drug Brands in India Calculate Ideal Weight for Infants Loram (2 mg) (Lorazepam) Indian Medical Journals Selfie Addiction Calculator Hearing Loss Calculator Post-Nasal Drip
This site uses cookies to deliver our services.By using our site, you acknowledge that you have read and understand our Cookie Policy, Privacy Policy, and our Terms of Use  Ok, Got it. Close
×