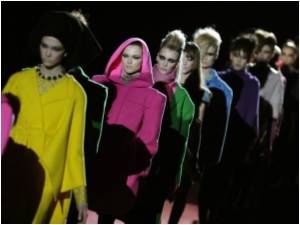 A tropical hanging garden has been conjured up as the backdrop for the spring/summer 2014 collection by Dior designer Raf Simons.

Former Bond girl Olga Kurylenko, Czech model Eva Herzigova and Valerie Trierweiler, the partner of French President Francois Hollande, were among those on the front row at the show at Paris's Rodin Museum.

The vast flower-filled set was described by Dior as the "experimental habitat of the new flower woman... an ordering of the artificial and real... the manmade and artificial".


Looped, pleated lantern dresses stood out and were according to the fashion house the only designs to have been inspired by the Dior archive.

Coats, jackets and asymmetrical wrap skirts with a metallic effect came in a palette of blue, black, grey and white, representing starlight, while moonlight came via jackets in either shiny and translucent or matte textures.

In other looks, sunlight was evoked through light airy tops and flowing, oversized trousers in shades of blue, grey and red as well as more neutral tones.

Meanwhile, French designer Roland Mouret said that his collection of striped and geometric print designs had been inspired by Paris's tree-lined Palais-Royal park, once the haunt of famous names such as poet and writer Jean Cocteau and actress Sarah Bernhardt.

Describing the park as "a quiet hush from the chattering of Paris", he said it was also "one of the most beautiful contradictions in Paris, both wild and tame".

Monday will see one of the week's most anticipated shows -- the Saint Laurent collection by Hedi Slimane.

Credited with revolutionising menswear during his stint at Dior from 2000 to 2007, Slimane is famed for teaming jackets cut short with narrow trousers in a "skinny" style copied by mass-market designers worldwide and even adopted by the rock world.

But the French designer has ruffled feathers in the fashion world and baffled critics with his Saint Laurent collections.

Criticised by some for grungy looks that are just "not Yves Saint Laurent", others see him as nothing less than visionary.

Wang strove to stamp his own mark on the illustrious fashion house following his appointment as creative director last year at the tender age of 28.

More Than Half of Fashion Industry Workers Not Satisfied With Their Jobs
A new study has found that more than half of workers in the industry are dissatisfied with their ......

Fashion Stars Pay Homage to Classic Cinema
Milan Fashion stars have paid homage to classic cinema- a two way relationship which is one of the ....