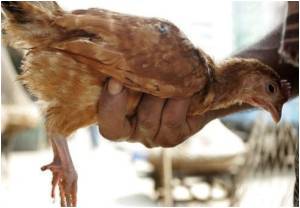 Veterinaries in Tripura have started the process of culling chickens, after an outbreak of Avian Influenza or bird flu in the state.

Veterinarians began the culling on Monday in the state-owned poultry farm in Gandhigram, about 30 kilometres from state capital Agartala.

The poultry farm is one of the main chicken breeding centres in the state with a capacity of about 7,000 chickens.


Officials said about 380 birds had died between the March 1 and March 4, after which samples were sent to the High Security Animal Disease Laboratory (HSADL) in Bhopal

Nearly 3000 ducks have been slaughtered in Tripura following confirmation of a bird flu outbreak on a duck farm in the north-eastern region.
Advertisement
Test reports came positive for the H1N5 virus on Sunday.

he in-charge of the Gandhigram State Poultry Farm, Dipangshu Chowdhury, said: "The culling process will continue for the next two days. Along with the hens we have another 1,400 Japanese peahens and 20,000 eggs, which need to dumped"

Chowdhury added the poultry in the radius of 10 kilometres would be culled, in addition to the birds in the farm.

A high alert has been sounded throughout the state for monitoring the spread of bird flu.

This is the second time bird flu has been detected in the state after February this year. Health and veterinary workers had then culled more than 4,000 chickens.

Millions of chickens and ducks have been culled since then to contain the virus.

Bird flu epidemics could be prevented because of the genetic modifications made in chickens. These modified chickens can get infected with bird flu but could not pass it on to other chickens.
Advertisement
News A-Z
A B C D E F G H I J K L M N O P Q R S T U V W X Y Z
What's New on Medindia