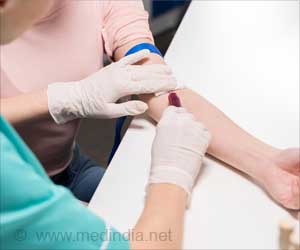 Although TNBC represents just 10-15 percent of all breast cancer diagnoses, the disease is responsible for 35 percent of all breast cancer-related deaths. While significant advances in understanding the genomic drivers of primary TNBC have been made in the past decade, relatively little is known about metastatic disease because surgical tumor biopsies are rarely obtained from these patients.

Advertisement
‘Liquid biopsy is an easier method to study triple-negative breast cancer genome compared to the other painful procedures.’

For this new study, researchers completed what is believed to be the largest genomic characterization of metastatic TNBC derived exclusively from liquid biopsies. This was done by measuring cell-free DNA levels in the blood -- DNA that is excreted from both cancerous and normal cells into the bloodstream. The study included blood samples from 164 women with metastatic TNBC.


"Traditionally, we would need to obtain a tissue biopsy to perform the whole genome sequencing tests that could reveal potential DNA-level mutations driving a patient's specific cancer. For metastatic breast cancer patients, however, tissue biopsy can be risky or painful," says Daniel Stover, MD, co-first and co-corresponding author of the study and a breast medical oncologist/researcher with the OSUCCC - James. "Being able to do this type of genomic analysis from a simple blood draw allows us to get a picture of a patient's specific cancer genomic characteristics in a less invasive way." Researchers then used a customized liquid biopsy technique they developed to distinguish levels of DNA from cancer cells and healthy cells (tumor fraction). Whole genome sequencing was performed to identify potential mutations associated with metastatic TNBC.
Advertisement
The team found that 64 percent of patients had more than 10 percent tumor DNA, and that this threshold of tumor DNA was correlated with poor survival outcomes in patients with metastatic TNBC. Additionally, researchers used genome-wide data to identify specific abnormal genes more frequently altered in metastatic TNBC compared with primary cases of the disease. These abnormal genes were associated with survival outcomes in the metastatic TNBC patient population and could serve as targets for new therapies for at-risk populations in the future, researchers say.

"The recognition that a significant fraction of patients harbor greater than 10 percent tumor DNA in blood suggests that liquid biopsies may enable routine and non-invasive profiling of cancer genomes for patients with metastatic TNBC," says Viktor Adalsteinsson, PhD, co-corresponding author and group leader of the Blood Biopsy Team at the Broad Institute.

Researchers say this study suggests that minimally invasive liquid biopsies could be used as a new predictive marker for metastatic TNBC.

"This is a very challenging disease. Our team's findings -- and others enabled by liquid biopsy --could improve how we track disease and treat our patients in the clinic," says Heather Parsons, MD, MPH, co-first author of the study and breast medical oncologist/researcher at Dana-Farber Cancer Institute and Harvard Medical School.

"These are exciting and important discoveries that could help us understand how a patient's cancer is likely to progress and, ultimately, could have the potential to guide treatment decisions based on specific genomic risk factors," adds Stover, whose plans for his laboratory at the OSUCCC - James include expanded validation studies with a goal to bring this test into the clinic and investigate new methods to study circulating DNA.

Aqueous Humor: A Liquid Biopsy for Retinoblastoma
Measurable amounts of tumor DNA - genetic information from the tumor found in the aqueous humor of ....

Liquid Biopsy Predicts Immunotherapy Response in Cancer Patients
Tumors with most mutations - considered the worst tumors, are now considered the best cancers in ......

One Liquid Biopsy - Screening for Many Types of Cancer
Single blood test that screens for eight common cancer types and identifies the location of the ......