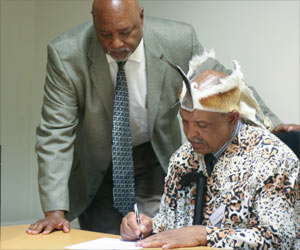 The resolution comes after a week of activities lead by the Citizens Commission on Human Rights (CCHR), a mental health watchdog group, to warn and educate Cape Town parents and youth on the dangers of psychiatric drugs.

Conforming to Masculine Norms may be Harmful to Men's Mental Health

Men who see themselves as playboys or as having power over women are more likely to have psychological problems than men who conform less to masculine norms.
Advertisement
‘There are 27 international drug regulatory warnings on psychiatric drugs causing mania, hostility, violence and even homicidal ideation.’

"I am issuing an official warning to the Khoisan people and all other Tribes and Nations against the dangers of psychiatry and I mandate all kings and leaders of all Southern African nations to denounce psychiatry and the psychiatric drugging of children," reads the resolution.


The King points to reports that South Africa has one of the highest rates in the world of prescribed psychiatric drugs for children labeled with ADHDa rate even higher than that in the U.S.

Depression affects 10% of Americans and is a leading cause of disability and mortality. And yet, only an estimated 56% of patients seek treatment.
Advertisement
There are 27 international drug regulatory warnings on psychiatric drugs causing mania, hostility, violence and even homicidal ideation and in 2005 the South Africa Medicines Control Council issued a "Drug Alert" that SSRI antidepressants cause increased risk of suicide in children and adolescents.

"We must protect our children," asserts the King. The resolution comes after a week of activities lead by the Citizens Commission on Human Rights (CCHR) (www.CCHRint.org), a mental health watchdog group, to warn and educate Cape Town parents and youth on the dangers of psychiatric drugs.

On Saturday, King Brown accompanied Rev. Fred Shaw, international spokesperson for CCHR, to lead a Children's Rights protest march against the World Psychiatric Association's (WPA) International Congress at the CTICC in Cape Town. Protestersdoctors, mothers, fathers and childrenchanted, "WPA, WPA, how many kids did you drug today? Hey, hey WPA, how much money did you make today?"

Rev. Shaw said, "Few parents are aware that psychiatrists admit they do not have any medical test to confirm ADHD or any mental disorder, nor do they have any cures. However, the drugs they prescribe have been linked to suicide, violence, heart conditions, high blood pressure, loss of appetite, and psychosis."

Following the march, the King and the Reverend officiated the grand opening of CCHR's world-acclaimed free traveling exhibit: Psychiatry: An Industry of Death at the Castle of Good Hope. The "mobile museum" includes historical sections on psychiatry's role in apartheid as well as contemporary sections on psychotropic drugs and children's rights.

Countering psychiatry's founding tenet that "Man is an animal," the King ends his resolution with, "We are a spiritual people; and psychiatry is an attack upon the souls of man and against God."

The free exhibit having already toured more than 443 major cities around the world and educating over 805,000 people is open through 26 November at the Castle of Good Hope, 9 am-6 pm. Catch it before it moves on to its next tour stop.

The rural folk do not have the plastic money option. They are missing consultation dates in hospitals because they cannot afford the doctor's fees.
Advertisement
<< Avoid Smoking, Drink Enough Water to Maintain Soft Lips Dur...
Hemophilia Federation India Spreads Awareness About the Dis... >>

Drug Addiction, Mental Health Can be Treated by Marijuana

Using marijuana could help some alcoholics and people addicted to opioids kick their habits, a UBC study has found.

Drug Side Effects Calculator Find a Doctor Nutam (400mg) (Piracetam) Selfie Addiction Calculator Drug - Food Interactions The Essence of Yoga Iron Intake Calculator Indian Medical Journals Pregnancy Confirmation Calculator Daily Calorie Requirements
This site uses cookies to deliver our services.By using our site, you acknowledge that you have read and understand our Cookie Policy, Privacy Policy, and our Terms of Use  Ok, Got it. Close
×