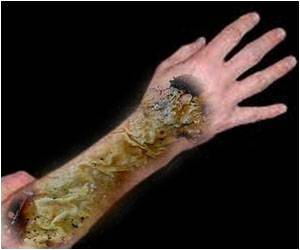 A jelly-like material and wound treatment method that appeared to regenerate healthy, scar-free tissue on skin damaged by severe burns has been developed by Johns Hopkins researchers.

In the Dec. 12-16 online Early Edition of Proceedings of the National Academy of Sciences, the researchers reported their promising results from mouse tissue tests. The new treatment has not yet been tested on human patients. But the researchers say the procedure, which promotes the formation of new blood vessels and skin, including hair follicles, could lead to greatly improved healing for injured soldiers, home fire victims and other people with third-degree burns.


The treatment involved a simple wound dressing that included a specially designed hydrogel -- a water-based, three-dimensional framework of polymers. This material was developed by researchers at Johns Hopkins' Whiting School of Engineering, working with clinicians at the Johns Hopkins Bayview Medical Center Burn Center and the Department of Pathology at the university's School of Medicine.


Third-degree burns typically destroy the top layers of skin down to the muscle. They require complex medical care and leave behind ugly scarring. But in the journal article, the Johns Hopkins team reported that their hydrogel method yielded better results. "This treatment promoted the development of new blood vessels and the regeneration of complex layers of skin, including hair follicles and the glands that produce skin oil," said Sharon Gerecht, an assistant professor of chemical and biomolecular engineering who was principal investigator on the study.

Gerecht said the hydrogel could form the basis of an inexpensive burn wound treatment that works better than currently available clinical therapies, adding that it would be easy to manufacture on a large scale. Gerecht suggested that because the hydrogel contains no drugs or biological components to make it work, the Food and Drug Administration would most likely to classify it as a device. Further animal testing is planned before trials on human patients begin. But Gerecht said, "It could be approved for clinical use after just a few years of testing."

John Harmon, a professor of surgery at the Johns Hopkins School of Medicine and director of surgical research at Bayview, described the mouse study results as "absolutely remarkable. We got complete skin regeneration, which never happens in typical burn wound treatment."

Skin Self Examination
The skin self examination means checking one's own skin for any visible abnormal growths or unusual change in its continuity and appearance.
READ MORE