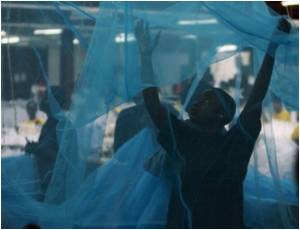 Use of insecticide treated mosquito nets could reduce the transmission of Japanese Encephalitis (JE) to humans, revealed in a study.

The study conducted by the Regional Medical Research Centre (RMRC), Dibrugarh, North East Region (NE), Indian Council of Medical Research and showed that the use of insecticide-treated mosquito nets (ITMNs) on humans and pigs reduced transmission of JE 72 percent in humans.

The Central nervous system consists of the brain, the spinal cord, and the body's nerve network. This complex system is based on one kind of cell the neurons.
Advertisement

The study looked at the effectiveness of using ITMNs to protect both pig and human populations. It evaluated the efficacy of reducing the transmission of JE in areas where high virus activity has been reported.


The JE virus multiplies rapidly in pigs, considered by experts to be a key element in the natural cycle of the virus and its transmission to humans.

Vaccination Campaign to Protect Against Japanese Encephalitis Kickstarts in UP

A vaccination campaign has begun in Uttar Pradesh to combat Japanese Encephalitis.
Advertisement
Sharp drops in infection rates were found in three locations following the use of ITMNs. In one location, the nets were used to protect both humans and pigs which resulted in the greatest drop in infection rates (72 percent), compared with areas where treated mosquito nets protected only humans (67 percent) or pigs (56 percent).

"We are pleased that the results of this study show that ITMNs are extremely effective against JE. Educating people in JE-prone areas that using ITMNs will help reduce the transmission of the disease without disturbing social customs in these communities. We believe that this will, in turn, reduce mortality associated with JE while keeping communities healthy and productive, further improving the global economy," said Prafulla Dutta, Scientist, RMRC, NE.

The researchers noted that insecticide components, particularly pyrethroids, are gaining importance in mosquito control because of their low toxicity towards mammals and the strong repellant impact on mosquitoes.

The findings have been published in the American Journal of Tropical Medicine and Hygiene.

Three Million Mosquito Nets to be Distributed in Sierra Leone

A massive campaign to distribute three million mosquito nets began in Sierra Leone in an effort to cut malaria by up to 40 percent in the country of six million people.
Advertisement
<< New Marker for Biliary Artresia Identified
Life Insurance and Australian Mums >>