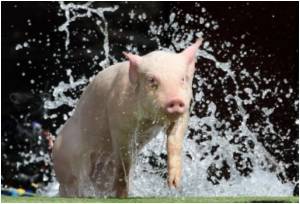 "The genetically modified piglets could bring hope to people who are in need of organ transplants but have failed to find a donor," the Nanjing-based Yangtze Evening Post quoted Zhao Zijian, head of the Metabolic Disease Research Center at Nanjing Medical University, as saying.

Scientists have genetically modified a Yorkshire pig, which will be the first of a new generation of 'Frankenswine' hogs that are designed to be cheaper and greener.
Advertisement

His research group has been studying GM technology since 1998 in the hope of replacing the gene in pigs that causes humans to reject transplanted pig organs, reports China Daily.


"Just as people with different blood types cannot accept blood transfusions from one another, pig organs were rejected by all human recipients before I replaced a certain sugar molecule with a human gene," said Dai Yifan, deputy director of the research center.

A landmark field trial will be carried out in Malaysia, the health minister announced, that will involve releasing genetically modified mosquitoes to fight dengue fever by the end of this year.
Advertisement
Dai successfully bred the so-called transplantation-friendly GM pigs in a laboratory at Revivicor Inc in the U.S. and took cells back to China earlier this year from which he plans to clone thousands of pigs.

The first brood will be born in five or six months in Nanjing, capital of Jiangsu province. They will then undergo additional experiments to see if they are suitable donors of hearts, kidneys and livers.

The scientists are currently constructing sterile pigsties that are 'as clean as an operating room'.

"The sterile environment will mean there are no viruses on the pigs that could cause diseases among humans," said Dai.

The researchers will apply for permission to conduct clinical experiments after the piglets grow.

They, however, said it was not known whether the government would allow experiments on transplanting pig organs into humans.

Meanwhile, transplant surgeons have expressed doubts about the project.

"We know little about the viruses carried by pigs, so transplanting a pig organ into a human could add to the risk of animal epidemic diseases infecting humans," said Lu Shichun, a liver transplant expert at Beijing YouAn Hospital.

Pigs that are genetically modified to suffer from incurable human diseases have been created by Scottish scientists so they can be used by drug companies
Advertisement
<< Should All Student Athletes Be Subjected to Heart Screening...
Drug for Diabetes Prevention >>