Trampolines can be Harmful for Kids 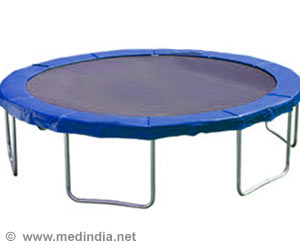 The American Academy of Pediatrics (AAP) has warned that installing a trampoline in the backyard could be dangerous for children in the house as it increases the risk of children suffering from breaking or fracturing a bone or receiving a joint dislocation.

Trampolines are increasingly becoming popular as family install it in their gardens but researchers at AAP said that pediatricians should actively discourage families from using trampolines as they pose a serious risk for children and young adults.

A fracture is a condition where the continuity of the bone is lost. Majority of bone fractures occur because of high force impact or stress on a bone.
Advertisement

The researchers analyzed a number of studies and found that more than three quarters of injuries on trampolines occur when more than one person is using it. Nearly half of the injuries suffered by children came when they were on a trampoline.


"Pediatricians need to actively discourage recreational trampoline use. Families need to know that many injuries occur on the mat itself, and current data do not appear to demonstrate that netting or padding significantly decrease the risk of injury", lead researcher Dr Michele LaBotz said.

Colles fracture or broken wrist is a wrist fracture, which occurs within an inch of the wrist joint. Colles fracture involves the forearm bone's distal end of the radius.
Advertisement
<< BPA Additives can Lead to Reproductive Damage in Women
Illegal Drug Use Rate High Among Gays and Lesbians >>