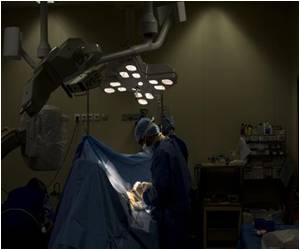 Researchers will begin work on a revolutionary "traffic light pacemaker" that controls the beating of damaged hearts using blue and yellow fibre optic lights inside the body.

After heart attacks and other major cardiac problems that can damage the heart muscle, patients become vulnerable to dangerous disruptions in the heart's rhythm, known as arrhythmia, often leading to heart failure, the Independent reported.
Advertisement

Researchers are exploring whether stem cell-generated heart cells could be implanted to regenerate the damaged areas, but progress has been held back because tests in the laboratory and in a small number of patients have shown that new tissue often fails to beat in time with the remaining healthy heart muscle.


Now, a joint UK-Israeli project is to develop the use of special proteins that react to light to regulate the heartbeat.

Chris Denning of the University of Nottingham, who will lead the UK part of the project, said that these light-sensitive proteins are not novel, good old Nature has been using these things for a long time. Like those in the back of the eye, they receive a light signal that converts into an electrical signal.
Advertisement
Denning noted that in the eye, that signal goes to the brain enabling vision and in green algae it allows the organism to move toward a light source and thrive, adding that all they are doing in this project is hijacking some of that natural technology and putting it into heart cells so that hearts become sensitive to light.

Pacemaker's blue light, which will shine on the implanted tissue through fibre optic wires, will react with one of the proteins to induce electrical activity that will make the new muscle contract, while the yellow one will react with other protein to suppress electrical signals and prevent contraction. Applied in sequence, these lights make the muscle mimic a natural heartbeat.

Smallest Pacemaker of the World - 'Vitamin Pill-Sized'
A new cardiac pacemaker, still in investigational stage, is as small as a multivitamin pill, ......

Breakthrough Battery-less Pacemaker For The First Time
Researchers in a revolutionary breakthrough have developed a new batteryless cardiac pacemaker for ....

Patients With Pacemaker and Defibrillator at Risk Due to Poor Health Literacy
Inadequate knowledge of how the devices work may prove fatal for patients who rely on pacemakers ......