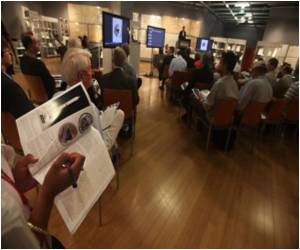 Tracey Emin's unmade bed artfully littered with cigarette packs, condoms and underwear is expected to fetch around £1 million at an auction.

The work, called simply "My Bed", cemented Emin's notoriety when it was shortlisted for the 1999 Turner Prize, although the British artist eventually lost out to future Oscar winner Steve McQueen, who directed "12 Years a Slave".

Creating a new record for the auction of a comic strip, an original page of drawings of Tintin has been sold for more than 2 million euros
Advertisement

The bed was later bought by wealthy art dealer Charles Saatchi, who is selling it at Christie's auction house in London on July 1.


It has been priced at between £800,000 and £1.2 million. All proceeds from the sale will help subsidise free entry at the Saatchi Gallery in London and its free education programme for schools.

The microfilm Bible that was on the Apollo 13 mission as it flew round the moon has fetched over $75,000 in an auction of space memorabilia in Dallas.
Advertisement
Emin was a leading light of the group dubbed the Young British Artists, along with Damien Hirst and Sarah Lucas, but appears to be mellowing with age.

The 50-year-old recently spoke out in support of Prime Minister David Cameron's Conservative Party and has described herself as "actually quite old-fashioned".

"I love fun and I am notorious for throwing a good party, but I think at my age there should be some decorum," she said.

"I want to ease down from that sort of thing and concentrate on my work."

"If that is going well, everything else falls into place. I am not married, I don't have children, I am totally financially independent and all I want to do is enjoy my work, which gives me the ultimate pleasure in life."

A portrait of Pakistani schoolgirl Malala Yousafzai painted by a leading British artist has been auctioned for over $102,500 in New York.
Advertisement
<< Differences in the Makeup of Indigenous Rose Species and Mo...
Why Baby Girls Win in the Battle for Survival? >>