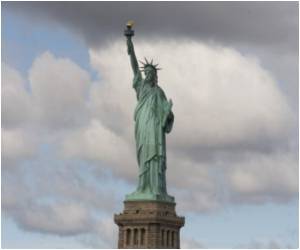 The Statue of Liberty has closed its doors due to the US government shutdown. Thousands of frustrated tourists had the choice of a one-hour boat trip around New York harbor or their money back, with one of the most iconic monuments in the United States closed.

Dozens of people working on the boats taking people to and from Liberty Island, run by US National Parks, were on hand with infinite patience and multiple languages to help marshall the baffled tourists.

No statue today, nobody is going on the island, said Brian Fahey, who works for Statue Cruises at the Battery Park pier in southern Manhattan.


"But you can join a one-hour harbor cruise that goes by the Statue, Ellis Island, Ground Zero, the Brooklyn bridge," he added.

Large notice boards everywhere repeated the same information.
Advertisement
"The government has temporarily shut both the Statue of Liberty and Ellis Island. Please join our one hour sightseeing tour and see the magnificent sights of New York harbor."

But many visitors were reluctant to be fobbed off with a boat trip.

"I just arrived yesterday from Seattle, I bought my tickets yesterday, they could have suspended the sales, or sent notifications," said Shriram Parameshwaran, a 26-year-old engineer.

He was uninterested in the cause of the shutdown -- the latest ideological skirmish between President Barack Obama and House Republicans over the scope of the US government.

"I have no idea what this is about," he told AFP.

He wanted his money back. He wasn't interested in the mini cruise.

Stefan Neuhaus, a retiree on holiday from Berlin with his wife, was annoyed but philosophical, his head in a guide book looking for an alternative plan of action for the beautiful autumn day.

"I was very happy, I had tickets for the crown and now it's impossible... there is no possibility until November and we'll be gone."

"It is a very bad political system, the opposition has such strong power," he said.

Michael Mueller, a retired visitor from Arizona, and his wife Bea had planned their trip to New York for six months.

Instead, she was left in tears at what she said should be the last thing to close.

"The Statue of Liberty is such a strong symbol for so many people. It is America, it symbolizes freedom, jobs, a government you can trust," she said.

Her husband said he was fed up.

"I am really unhappy with Washington, by the executive power and Congress, they cannot get anything done," he said.

As the morning went on, the crowd of tourists only got bigger. So did the incomprehension.

Staff were left to explain, again and again, in English, in Spanish or sometimes in Italian.

"I've read everything about the Statue, I always wanted to come to New York, I came from Seattle and it is closed" said Michael Hines, 47, blaming the Republicans.

One staff member, called out to man the crowd of tourists and who refused to give her name, said she was just happy to still be working.

"People in the concession stands on the island, they have all been furloughed."

According to Fahey, 8,000 people visit the Statue of Liberty each day at this time of the year.

No one knows when it will reopen. The Statue was already closed eight months after the devastation of Hurricane Sandy last October.

"Never mind, it's just bad luck," said one French couple from the Auvergne. "Happily there are plenty of other things to do."

Source: AFP
Advertisement
<< Happiness is So Simple to Achieve
Researchers Gain New Insight into Role of Brain Stress in Ob... >>

Statue Of Liberty To Close For A Year For Giant Makeover
The Statue of Liberty in New York will close for a year from October 28 to undergo a 27.25 million ....