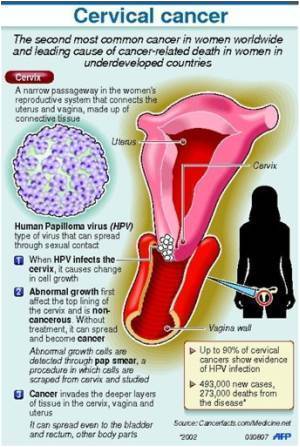 It is well-known that human papillomavirus (HPV) causes cervical cancer, the second most common cause of cancer death for women.

It is a common cause of anogenital and some head and neck cancers. Thanks to research being done at Tufts University School of Medicine, patients infected with cancer-causing HPV may someday have an alternative to surgical and harsh chemical treatments. In a study funded by the National Institutes of Health and published online in advance of print in The FASEB Journal, the researchers report on the development of a protein-based inhibitor that could provide a topical treatment for HPV.

"Currently, there is no cure for HPV, and the available treatment options involve destroying the affected tissue. We have developed a protein inhibitor that blocks HPV protein expression in cell culture, a first step toward a topically-applied treatment for this cancer-causing virus," said senior author James Baleja, PhD, associate professor of biochemistry at Tufts University School of Medicine (TUSM) and member of the biochemistry program faculty at the Sackler School of Graduate Biomedical Sciences at Tufts.


"Vaccines are helping to lower the incidence of HPV, but vaccines will not help the millions of women and men who currently have an infection, especially those who have high-risk and persistent infections. Social and economic challenges make widespread administration of a vaccine difficult, particularly in developing countries. A topical treatment for HPV could provide an economical option," he continued.

Cancer is one of the frequently talked about and most feared disease that falls under the genre of lifestyle diseases that have evolved, rather rapidly, in the past two decades.
Advertisement
HPV affects approximately 20 million people in the United States, making it the most common sexually transmitted infection. There are more than 100 types of HPV of which more than 40 are sexually transmitted. These include two high-risk types, HPV-16 and HPV-18, which cause the majority of cervical and anogenital cancers, and some portion of head and neck cancers, particularly oral cavity and oropharynx cancers. Cervical cancer is diagnosed in nearly 500,000 women each year, killing 250,000 annually. In the United States, it was estimated that 12,000 women in 2010 would be diagnosed with cervical cancer, while 10,100 women and men in the United States get vulvar, vaginal, penile or anal cancers each year. In addition, some portion of the head and neck cancers in the United States (11,300 men and women each year) is attributable to HPV. Other types of HPV, or low-risk HPV, can cause genital warts or are infections that clear on their own.

In their efforts to inhibit HPV, Baleja and his team zeroed in on the viral protein E2, which controls viral activities including DNA replication and the activation of cancer-causing genes. Using structure-guided design, the team developed a protein called E2R that prevents E2 from functioning normally. When the researchers applied E2R to a cell model of HPV biology, viral gene transcription was halted. Because HPV infects epithelial cells, the outermost layer of the skin and the mucous membranes, protein inhibitors such as E2R could be applied in a topical form.

Baleja and colleagues used biophysical tools including circular dichroism spectroscopy and x-ray crystallography to test the structure and stability of different inhibitors. The most stable inhibitor was then tested in mammalian cells and was found to inhibit the E2 protein of HPV-16, the high-risk strain that is most commonly associated with cancers. The data in this study suggest that the inhibitor may also be effective against another high-risk virus, HPV-18, as well as a low-risk virus, HPV-6a, which causes warts.

Many Oz Girls Not Returning for Cervical Cancer Vaccine

New figures have shown that the number of girls between 12 to 13 years of age returning for their second dose of cervical cancer vaccinations has declined.
Advertisement
Advertisement