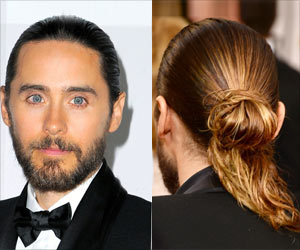 The monthly volume of beauty-related searches from January 2013 - August 2015 has revealed that the hairstyle emerged as one of the most-searched for looks. The trend set by Harry Styles, Jared Leto and Leonardo DiCaprio spread like wildfire, and men all over the globe turned to the internet to recreate the look at home. They key phrases were "how to grow a man bun" and "how to tie a man bun."


‘Google says that men's hair queries overtake women's hair queries for the first time. The trend set by Harry Styles, Jared Leto and Leonardo DiCaprio spread like wildfire, and men all over the globe turned to the internet to recreate the look at home. ’


Google notes that the most trending women search was for braids. The third major beauty search trend since 2013 has been for daring hair colors. The recent 'Granny hair' trend inspired by the 'Bitch Better Have My Money' singer Rihanna and Kelly Osborne, means that searches related to grey and silver tresses are among the most popular.

Brittle and Dry Hair - Symptom Evaluation
Is your hair dry and brittle? Are you facing hair-loss problems? It is an early symptom or sign of thyroid problem or due to poor nutrition. Other causes are less prevalent.
READ MORE