Too Much Salt Not Good! 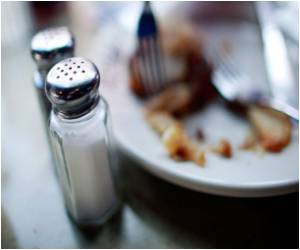 The World Action on Salt and Health (WASH) has sponsored the World Salt Awareness Week, March 21 to 27, 2011, the theme of which is "Salt and Men's Health."

The Food and Grocery Council CEO, Katherine Rich, has announced that reputed food Companies like Kellogg's have removed many hundreds of tons of salt from their food products.

Consuming too much salt brings on cardiovascular disease (CVD).  According to the World Action on Salt & Health (WASH), a diet high in sodium can promote obesity and osteoporosis, damage to the kidneys and heart, and increased risk of cancer.


CVD attacks more men than women as men consume more salt than women, and have higher blood pressure. The Centers for Diseases Control and Prevention (CDC) has revealed that an average American consumes around 3,400 milligrams of sodium, which is double of the recommended limit.

Salt is substance existing in water as well as in foods. The article discusses the major risks involved in ...

Salt is essential for the proper functioning of body but most of us generally exceed the intake of salt than ...
This site uses cookies to deliver our services.By using our site, you acknowledge that you have read and understand our Cookie Policy, Privacy Policy, and our Terms of Use  Ok, Got it. Close
×

Too Much Salt Not Good! Personalised Printable Document (PDF)