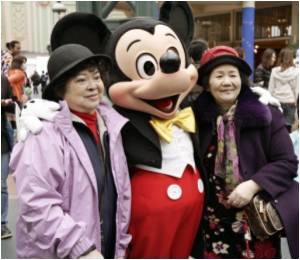 500 million - that's the total number of visitors to Disney's two theme parks on the outskirts of Tokyo, last counted on Friday, with a housewife winning a ticket for free admission to both resorts for five years.

"I'm surprised and happy," 38-year-old Megumi Soma, flanked by Mickey and Minnie Mouse, said on a podium as a crowd of visitors cheered.

Soma, a housewife from Gumma prefecture north of Tokyo, was visiting Tokyo Disneyland with her husband and two children and struck lucky on her children's first visit to the nation's most popular theme park.


Tokyo Disneyland opened in the suburbs of the Japanese capital on April 15, 1983 as the first Disney theme park outside the United States.

Built on reclaimed land in Tokyo Bay dubbed "Maihama" -- a Japanese take on Miami Beach near Florida's Disney World -- it has sprawled to include hotels, a shopping mall, an aqua park and a permanent Cirque du Soleil.
Advertisement
Oriental Land Co. Ltd. of Japan runs the resort under a licence contract with the Walt Disney group.

Japan's birth rate may be on the decline, but the parks boast loyal fans.

The number of visitors to Disneyland and DisneySea, a water park opened in 2001, has stood at record levels of around 25 million annually in recent years, up from 9.9 million people in Disneyland's first year.

Oriental Land has set its sights on the generation who grew up watching Disney cartoons on television and took their children to the park's opening 27 years ago, launching a cut-rate annual pass for visitors aged 60 or older.

Source: AFP
Advertisement
<< Vitamin A Makes Breastfeeding With HIV More Risky: Study
More Than 17,000 Vie to Be Chinese Panda-Keeper For a Month >>

US Disneyland Sued by Muslim Employee Over Headscarf Ban
Headscarf row has surfaced again and this time it is a Muslim woman who is suing Disneyland, for ......