Toddler Dies of Measles in Germany 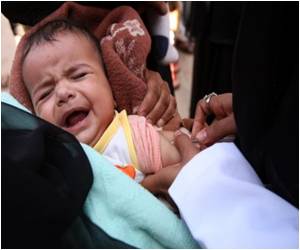 As Germany suffers its worst outbreak in years of the highly infectious virus, a toddler has died of measles in Berlin, health authorities said Monday.

The 18-month-old boy died on February 18 -- the first known fatality among more than 500 measles cases since October in the German capital -- a Berlin health department official told AFP.

Autism Not Linked to Measles Vaccine, Say Huntsville Pediatricians, CDC
As the measles outbreak continues to grow in the United States, some parents refuse to vaccinate ......

Canada Health Authorities Warn of Measles spread at Christian Youth Event
Canadian health officials warned that a person infected with measles may have spread the virus at a ...

Measles Outbreak Hits Canada
A measles outbreak with at least one case linked to a flare-up of the virus in the neighboring ......

Super Bowl Alert Following Warning of Measles Outbreak in Arizona
After a warning of possibility of 1,000 people being exposed to a measles outbreak, as Arizona ......