Tobacco Use a Big No for People With TB and Diabetes, Say Health Experts 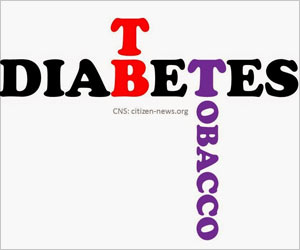 Health experts say tobacco use is hazardous for people living with diabetes and those suffering from or at risk of tuberculosis (TB).

For the former it acts as an hindrance in their control of blood sugar and in case of the latter their ability to transmit the disease can be enhanced. Nicotine, which is accumulated in the body through smoking, reduces insulin sensitivity which proves detrimental in patients of diabetes.

"Nicotine, which is a major component of cigarettes increases the insulin resistance in the body as well as it hampers control of diabetes." said Dr Kauser Usman, Associate Professor, Department of Medicine at King George Medical University (KGMU).

Tobacco use also increases the risk of cardiovascular diseases in people living with diabetes. "It has been seen that a person with diabetes has the same risk of suffering a heart attack as a person who has already had a heart attack. That is why diabetes is very serious in terms of cardiovascular diseases and smoking is one of the major risk factors of having this disease. So, if a patient of diabetes smokes, he/she is more vulnerable to contracting heart diseases," Dr Usman added.

Cigarette/bidi smoking can impact TB in several ways: - smoking damages the lungs and makes smokers more inclined to TB infection; smoking harms the person's immune system, reducing his/her capacity to combat infections, thus making them more vulnerable to TB; and in case the smoker already has TB it reduces the effectiveness of TB treatment which can lead to more severe forms of the disease and also to longer periods of the person remaining infectious.

Exposure to second-hand smoke increases the risks of both TB infection and development of active TB disease among children and adults. TB patients, who smoke in their homes, put their family at increased risk of TB infection. Even if they smoke in public places they can transmit TB infection. "If a TB patient is also a smoker, the smoke increases coughing and through cough he/she has more chances of spreading infection to people in the vicinity. So an added advantage of banning smoking in public places under COTPA is that it helps in controlling the spread of TB infection from TB patients who are smokers also, " said Dr Susheel Chaturvedi, District Tuberculosis Officer, Lucknow to Citizen News Service (CNS).

According to Dr Surya Kant, Professor and Head, Department of Pulmonary Medicine, KGMU: "All DOTS centres should also have Tobacco Cessation clinics (TCCs). KGMU has been running a DOTS centre since decades but since 2012, we also established a TCC in the same department. There should be co-operation and coordination between diabetes control program and Tobacco control programmes," he added.

TOBACCO CONTROL NODAL OFFICERS TO BE NCD NODAL OFFICERS TOO
It would be worthwhile to mention here that in response to an application filed by me under the Right To Information (RTI) Act , Ministry of Health and Family Welfare of Government of India informed that "As per the operational guidelines of the National Tobacco Control Programme (NTCP), all the states/districts have been directed to collaborate with similar other programmes like non-communicable diseases (NCDs) and Revised National TB Control Programme (RNTCP). States have also been directed to have a common state/district nodal officer for National Programme for Prevention and Control of Cancers, Diabetes, Cardiovascular Diseases and Stroke (NPCDCS) and NTCP". This indeed is an important policy decision already made at the national level linking two programmesNTCP and NPCDCS which, if implemented properly, will have far reaching public health benefits to.

Working in silos will never help. The Indian government has already done away with the division between NTCP and NPCDCS at the policy level. What remains to be done is that tobacco control programmes join hands with other public health programmes at the ground level for a healthier tomorrow in Uttar Pradesh.

American pregnancy diabetes calculator cautions you about the chance of having diabetes when you are pregnant. Pregnancy Diabetes can affect both the mother and the baby.
Advertisement
<< Child TB Problem More Serious Than Ever Before
Most Common Major Stressful Event in Americans' Lives is He... >>

Around one-third of the global population is believed to be infected by myobacterium tuberculosis, a pathogen that is known to cause TB