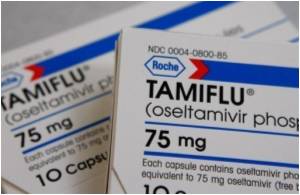 Billions of pounds of public money have been spent on [Tamiflu] and yet the evidence on its effectiveness and safety remains hidden from appropriate and necessary independent scrutiny.

This was said by Professor Sir John Bell, in an open letter to company director.

Tamiflu: Full Clinical Study Reports Should be Made Public

Full clinical reports of drugs authorized for use in patients should be made publicly available for independent re-analysis of the benefits and risks of drugs.
Advertisement

The letter is published on the BMJ's website alongside correspondence by the Cochrane team with Roche, the US Centres for Disease Control (CDC) and the World Health Organisation (WHO), as part of an open data campaign aimed at persuading Roche to give doctors and patients access to the full data on Tamiflu.


Dr Godlee's letter follows recent reports that the European Medicines Agency (EMA) has initiated infringement proceedings against Roche to investigate deficiencies in safety reporting, including the processing of around 80,000 reports on suspected adverse drug reactions.

Experts have warned that the safety and effectiveness of Tamiflu remains uncertain two years after Roche promised the BMJ it would release key Tamiflu trial data
Advertisement
Dr Godlee is also one of 28 signaturies to a letter published in The Times today calling on drug companies to "come clean" and make clinical trial data for all drugs in current use available to healthcare professionals.

Pressure from politicians is also mounting. Last week, Sarah Wollaston, a GP and Conservative MP, raised the issue of missing data in Parliament, while Health Minister Norman Lamb has agreed to meet experts to discuss the issue of access to clinical trial data.

In December 2009, Roche made a public promise to release full clinical trial reports of its antiviral drug oseltamivir (Tamiflu) in response to a major investigation by the BMJ and researchers Peter Doshi and Tom Jefferson from the Cochrane Collaboration.

The investigation found no clear evidence that Tamiflu prevents complications like pneumonia in healthy people. It also raised serious concerns about access to drug data, the use of ghost writers in drug trials, and the drug approval process.

Since the investigation, some further data have been released to the Cochrane reviewers, but the full data set has still not been provided.

The Cochrane reviewers now know that there are at least 123 trials of Tamiflu and that the majority (60%) of patient data from Roche Phase 3 completed treatment trials remain unpublished. Their main concerns relate to "the likely overstating of effectiveness and the apparent under-reporting of potentially serious adverse effects."

Meanwhile, Tamiflu has been a great commercial success for Roche and has been added to the World Health Organisation's list of essential medicines.

In her letter, Dr Godlee appeals to Professor Bell "to bring your influence to bear on your colleagues on Roche's board." She adds: "In refusing to release these data of enormous public interest, you put Roche outside the circle of responsible pharmaceutical companies. Releasing the data would do a great deal to restore confidence in your company and its board of directors."

In a response not for publication, Professor Bell said he has referred the matter to Roche and is awaiting a response.

"The open correspondence on bmj.com aims to hold specific individuals and organisations to account," writes Dr Godlee in an accompanying editorial. "Their actions are preventing independent scrutiny of the results of clinical trials and putting patients' lives at risk. We also hope it will contribute to a sea change in the public mood."

A poll on bmj.com last week asked: "Who is mainly at fault for denying access to negative clinical trial results?" Of the 569 votes, 69% said pharma, 13.5% said regulators, and 9% said legislators.

The BMJ plans to launch other campaigns linked to its investigations in the future.

Many in Britain administered with Tamiflu during the swine flu pandemic may well have suffered a series of side-effects they were not cautioned about, the revelations are leaking now.
Advertisement
<< 'Putting Babies at Risk' are Mums-to-be on Anti-depressants
Can You Hear a Scream in Space? Read On For The Answer >>